By News Staff on September 13, 2011 in Government Agencies/Utilities

and lightning, 144 players raised $35,000 gross in support of higher education and cultural enrichment at the soldout 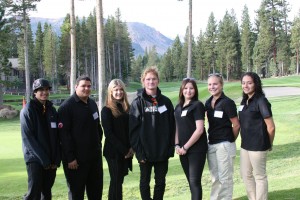 The tournament was called mid-way and became a best-of-9 hole competition, but the real winners were

whom were among the volunteers supporting the event. Highlights of the scramble tournament included an iPad2

“A sincere thank you to Dave Schacht and the staff of Sierra Star Golf Course, as well as Matt Mednick of Hyde

Maya Weinhart. “My staff and I also extend a hearty thank you to our sponsors, players, and volunteers for a job

well done. This is the first time we’ve been rained out on the history of the tournament and we still had a blast!

We are pleased we were able to raise the same amount as last year for higher education and the arts, despite

cutting the tournament short, and definitely look forward to next year’s event.”

After retiring to Hyde Lounge, players, volunteers and staff shared refreshments, participated in the Silent

Auction, and learned the names of the winners of the tournament, the raffles, and the Par 3 contests.

at a par 3 for their work at Hole 14. Kudos also go to the two die-hard foursomes of Dennis Agee, Jimmy Huh,

Doug Hanna, and Dion Agee, and Ben Wells, Matt Kendo, Chris Wylie, and Guy Morrow, both of whom stuck it out

and completed the entire 18-hole course despite the downpour.

Started in 2000, the Mammoth Lakes Foundation Golf Classic has been an integral way for the Foundation and its

and Mammoth Lakes Repertory Theatre, and planning for a proposed Mammoth Arts and Cultural Center.

The Mammoth Lakes Foundation is dedicated to supporting higher education and cultural enrichment in the Eastern Sierra.