The Inyo County Board of Supervisors is scheduled to consider entering into an exclusive negotiation agreement with Joseph Enterprises to build and lease a consolidated County office building near Wye Road and Highway 6 in Bishop. 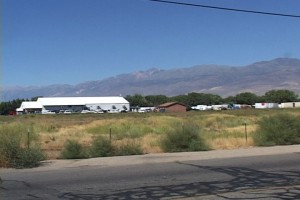 The County issued a Request For Proposals (RFP) for Consolidated County Office Space in the Bishop area in early 2009 to hundreds of potential developers and received two proposals. Since that time, staff has been negotiating with both respondents to determine which proposal might best meet the County’s needs. This process is culminating Tuesday with staff recommending that the Board consider entering into exclusive negotiations with Joseph Enterprises to explore the feasibility of the project further.

“Entering into an exclusive negotiation agreement is the next step in the process outlined in the RFP,” said Inyo County Administrative Officer Kevin Carunchio.

Carunchio stressed that the exclusive negotiating agreement is non-binding on the County. He said it does require the preparation of a non-binding Term Sheet, followed by non-binding Concept Plans – showing what County’s office space needs are and where services will be housed – that each must be approved by the Board of Supervisors in open session. If the Board of Supervisors approves of both the (non-binding) Term Sheet and Concept Plans, the last step will be to draft final documents that will be binding on the County if approved by the Board.

“We’ve still got a very long way to go,” Carunchio said. “The only decision that’s being made is who to negotiate further with. If approved, the exclusive negotiation agreement will create a framework to see if this project will ultimately make sense for the County and the developer.”

They have been trying to do the same thing in Mono for years, build all of the county offices and new court buildings in INCORPORATED Mammoth and let the County seat, Bridgeport, die.

Why not build the county services building in the county seat? First DWP with just a few departments to Bishop now all most all are in Bishop, now the courthouse that is purposed in Bishop. No wonder Independence is losing population and having trouble with school enrollment.

One supervisor stated that it was hard to get high level employees to apply because the job was in Independence. Other parts of the country travel much more than 50 miles to and from work each day.

If you want to live in Bishop so be it, but get to work where the job is located on your own
(this includes all county employees present and future).

I personally regret voting for my supervisor. Hell I went out of my way to vote for the sneak. I don’t see the need for all this wasted money. All I think we need are sidewalks on the roads we already have.

Considering that Inyo County is significantly “behind” in regards technology, services, and “logic” to the rest of the State of California and even Nevada; this is an excellent choice. Building a County center in the only incorporated city in Inyo County as well as the most populous is the logical decision. This type of facility will serve 65% of the County’s residents for decades to come as well as being at the intersection of two major highways and two major retail centers.

The Supes met in closed session for 18 months and then gave the public one business day’s notice before voting to enter into this exclusive negotiation for a 42,000 sq foot building at a cost of $15-$20 Million Dollars. They claim that it is not binding but in a very short time it can be. I agree that consolidation is good. I agree that owning is better than renting. I think the size and cost exceeds the need. They agreed to schedule public meetings in local communities. Please attend and get the facts. It’s our tax dollars and our deb’t and we should be involved in the decision.

this thing is already overbudget.

What is wrong with the current facility that a little remodel cannot accomplish?

So we are looking at using a prime piece of commercial property that could generate tax and business dollars for our community and using it for a building that spends those dollars we are so short on?

Maybe negotiations for local reservation lands should be made like the DMV and feds did. Leave the commercial property to generate revenue. That would be a fantastic location for a truck stop and or light industrial center.

Sally – I’ve always been curious about the arrangment between the tribe, the DMV, and the Interagency Command Center.

I wouldn’t be the least bit surprised if the State & the Feds built buildings on reservation land and lease the land until hec freezes over from the tribe. This would be a sweetheart deal for the tribe but a terrible deal for us taxpayers.

Do you or anyone else know the details of these building on reservation land?

I believe that when this parcel was going to be developed in the past the City of Bishop would agree only if all the water,sewer, fire protection, curbs,etc. etc. were installed first. Is this another county expense?

What about the Truck bypass that is being considered, the map in the Register looked real close to the same area?

A lot more questions than answers from our supervisors.

That would be 14 million, plus possibly 750K more. Cost of land, moving, and tenant improvements extra. Sounds like a minimum of 15 million. Can we get a guarantee that the money will be spent via local business and construction firms?

$2,000,000 upfront
$600,000 a year for 20 years
$750,000 in bonus payments
Donation of 5+ acres of County land at ? value
Cost of move and staff time
Cost of tenant improvments
This is supposed to accomplish the goal of reducing costs to taxpayers
I have lots of questions….
Supervisors meeting Tuesday (at 10am I think)

“non-binding term sheet” sounds like they haven’t even decided for sure what their words are going to mean. It is hard to estimate what you can’t even define.