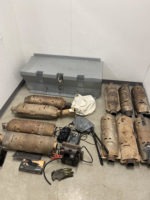 TWO CATALYTIC CONVERTER THEFT SUSPECTS ARRESTED, TWO AT LARGE, AFTER A PURSUIT BY OFFICERS FROM MAMMOTH LAKES TO HIGHWAY 395

June 27, 2022 – On Thursday, June 23, at approximately 11:45pm, Mammoth Lakes Police Officers responded to a local auto shop for a report of a stolen catalytic converter. The witnesses stated they saw three people cutting parts off a truck in the parking lot and then leave the scene in a silver SUV. This vehicle was also of interest in previous catalytic converter thefts from various vehicles in Mammoth Lakes.

Officers attempted to conduct a traffic stop on a vehicle matching the earlier description, and a pursuit ensued. The pursuit began at the intersection of Main St. and Old Mammoth Rd., travelled onto the Scenic Loop to the junction of 395, multiple forest service dirt roads and ultimately terminated south of Smokey Bear Flats. Sight was lost on the vehicle for some time as the chase was paused due to the silver
SUV traveling southbound in the northbound lanes of Highway 395. The vehicle was later located, unoccupied, on Pole Line Rd. It was determined that the vehicle was occupied by four people.

The following day, a tip came in that an individual matching the description of the driver was seen walking along Highway 395. He was ultimately taken into custody without incident. Later, a second person claiming to have been a passenger of the vehicle came to the police station to retrieve personal
property and was also arrested.
The two individuals have been booked into the Mono County Jail on charges of felony grand theft, evading, and conspiracy. Two individuals are still at large.

The Mammoth Lakes Police Department wishes to thank the California Highway Patrol, Mono County Sheriff’s Office and Frosty 4Wheeler’s Off Road Towing for their assistance in this case.

These morons wouldn’t be stealing these things if there were no market for them . MLPD , connect the dots and find who’s buying these stolen cat’s & throw their butts in jail !

Well well… just wait a couple days and maybe the two remaining suspects will come to MLPD to retrieve their personal property as well.
Job done.

I laughed out loud when I read that in the story.
My gosh,how stupid can you get.
Maybe they were trying for a clip on the T.V. show and re-runs of “The World’s Dumbest Criminals “…

There ya have it…
I’ve always said and thought Mammoth Lakes was,or was about to become a “little L.A”..with mountains.
If you don’t believe it,read the above story and/or come by and visit the area this Fourth of July week-end.