By Deb Murphy on May 25, 2022 in Bishop City Council, Recreation 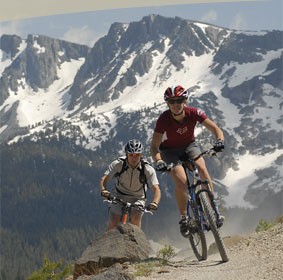 Two Bishop high school students are getting a lesson in how government works. Stephan Poole
and Henry Schober addressed the Bishop City Council last Monday presenting a Negative
Declaration on a proposed bike skills course at City Park. The two were armed with a detailed
proposal, plans for on-going development and potential grant sources.

As outlined, the Bike Park would be built in an undeveloped area of City Park on an area initially slated for future ball fields, west of Hanby Ave., east of the Community Garden and an existing paved bike path. The Bike Park’s north boundary wraps around the soccer field. As the proposal explains, the park “provides a learning environment to master skills before continuing on to more advanced terrain such as might be found on local trails or lift-served riding at Mammoth Mountain.”

The build-out plan will be incremental, starting with the easier elements of the park. “The park
would concentrate on features and lines at beginner and intermediate skill level to remain as
inclusive as possible,” the presentation material states. The park would not be lighted with the
intent for day use only.

Poole and Schober had already run the gauntlet of the City’s Parks and Recreation Department
and an earlier appearance before the Council. The agenda item was only for the Council to
accept the Negative Declaration. Matt Schober, a parent, told the Council the group is taking
the project one step at a time; he’s already started a list of interested parent and kids. The first
phase of the park will serve as a “proof of concept,” he explained.

Comments from residents near the area weren’t against the project itself, just the location with
a concern the feature would be an “attractive nuisance”. City Administrator Deston Dishion
explained the Bishop Police Department does regular after-hours drive-throughs in the area.
Bishop’s Community Services Manager Dan McElroy told the council his department is working on agreements with the user groups to nail down some of the details.

Council members were supportive. Jim Ellis used his Sierra Trash Eliminators as an example of
how a community group can develop. “Create a Facebook page, build a team,” he said. “Make
this work.”