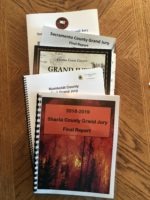 According to Louis Panetta, President of the California Grand Jurors’ Association, “We all know there are many issues that arise about the activities of local government and special districts. Just read some letters to the editor or attend a public meeting and you’ll hear many varied opinions. Some of the issues that are raised can become the subject of investigations by the Civil Grand Jury members within a county. Each year, there are excellent investigations and reports that are available for viewing on the CGJA website at https://cgja.org/search-grand-jury-report-topics. Now more than ever, I urge the public to take the time to learn more and consider applying to serve on the Civil Grand Jury or recommending it to a friend.”

The carefully selected jurors who choose to serve on a Civil Grand Jury in California are dedicated to ensuring that local government is effective, efficient, accountable and transparent. Panetta adds, “Not only are they using their critical thinking and writing skills to better understand a specific local government activity, but they often create friendships among their fellow jurors that last a lifetime!”

Established in the state constitution in 1850 and codified by the California legislature in 1872, grand juries devote hours of time and attention to city, county, school district and special district administration and governance in an effort to secure effectiveness, governmental efficiency, and understanding of taxpayer expenditures and public office holder and entity integrity.

As a truly independent body, each grand jury is free to choose which local governmental entities or public officials to investigate. With very limited exceptions, no one outside the grand jury can direct it to conduct an investigation.

Ideas for investigations generally come by way of three avenues: citizen complaints, matters raised by the members of the grand jury, and referrals from the preceding grand jury.

During its investigations, the grand jury acts as a finder of fact. In addition to determining if the official or entity under investigation is adhering to the laws that govern the operations of that entity, the jury analyzes whether the entity is operating in a businesslike manner and providing public services effectively and economically.

While it has no authority to order or otherwise compel compliance with its recommendations, it is through its reports that the grand jury wields its power. Those reports are influential because they attract the attention of the media, and subsequently, the voting constituencies of the investigated officials. The resulting public pressure often prompts the implementation of the recommended changes.

Typically, there are over 500 reports issued each year by California’s 58 county grand juries.

About the California Grand Jurors’ Association

The California Grand Jurors’ Association (CGJA) is an all-volunteer, membership nonprofit organization (501c3) dedicated to promoting, preserving and supporting the civil watchdog function of California grand juries. Each year CGJA provides training to grand juries to help them more effectively fulfill their state constitutional authority to, among other things, investigate and report on the conduct of local government as an arm of the Superior Court.

For more information, go to www.cgja.org. To apply to serve as a juror, check out the website of the Superior Court in your county.

Interesting! I was curious to read the most recent grand jury report and while doing so I learned our local grand jury has not met therefore no current reports due to Covid? That’s crazy. With all the crazy that’s gone on in our local government and zero oversight or looking… Read more »