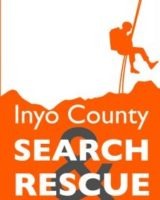 On December 13, 50-year-old Eric Goepfert left the Whitney Portal trailhead intending a winter ascent of Mt. Whitney via the Mountaineer’s Gully and North Fork of Lone Pine Creek trail.  His itinerary was for five days and four nights in the backcountry.  During the time of Goepfert’s hike, the Eastern Sierra received two major storm events with single digit temperatures, high winds and several feet of snow. When he did not come out as planned on December 17, his wife contacted the Inyo County Sheriff’s Office and search planning was initiated.

CHP Valley Division helicopter H-20 also conducted a search in the same area using a RECCO device (a harmonic radar system that detects passive reflector chips in certain outdoor clothing brands and electronics).  The RECCO detected a faint signal near the found items.  A CHP pilot was lowered via hoist cable to the location but did not find any further clues.

Through investigation, it is believed Goepfert was experiencing headache and nausea (symptoms of acute mountain sickness, or AMS).  This, coupled with a heavy winter pack and the severe storm conditions, likely caused Goepfert to fall about 30 feet to the base of the ledges on December 14.

Goepfert served in the US Army from the age of 18 and was an active Army Reservist. Inyo County Sheriff’s Office extends our deepest sympathies and condolences to the Goepfert family and to Eric Goepfert’s teammates and friends.

The Inyo County Sheriff’s Office thanks Inyo SAR, and CHP Inland and Valley Division Air Operations for their assistance.

This account posts submitted press releases.
View all posts by Press Release →
Week of December 20 – Listen To O. Henry’s “The Gift Of The Magi” On KSRW 92.5
Tonight December 21 “Operation Santa” Is Heading To A Bishop Neighborhood Near You!
5 Comments
Newest
Oldest Most Voted
Inline Feedbacks
View all comments

What is the difference between a “storm event” and a storm?

It’s spelled “ascent.” Assent is a homonym that means to agree or concur, and ascent means to climb or rise up. You’re welcome, from Captain Pedantic. 🙂

I’m waiting for the ever present comment of “he died doing what he loved ” . Real comfort for the family he leaves behind .

Thanks. If I said that was a “test” and you are the only one that passed would you believe me?