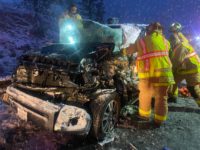 On December 13, 2021, at approximately 4:23 PM, CHP Bridgeport was notified of a two vehicle traffic crash on US 395 approximately 2 miles north of SR 108 at the south end of the Walker Canyon north of Chris Flat Campground.

US 395 was snowy and icy with chain controls in effect. An Eastern Sierra Unified School District Bus from Coleville High School, driven by Lawrence Anderson (DOB: 9/10/75) of Coleville was carrying 8 students southbound US 395 to Bridgeport.  A Toyota Tacoma driven by Robert Morten (DOB: 7/5/71) of Chula Vista was traveling northbound US 395.  As both parties entered a curved portion of US 395, Mr. Anderson was unable to maintain control of the school bus, causing or allowing the school bus to cross into the northbound traffic lane.  The left front of the school bus struck the left front of the Toyota.  There were no injuries to Mr. Anderson, there were no injuries to the eight students on the school bus, the right front passenger of the Toyota ( Cale Merton, DOB: 5/9/03) sustained minor injuries, Mr. Merton (driver), sustained moderate injuries, was pinned in the Toyota and needed to be extricated.  The crash was blocking the roadway and US 395 was closed from 4:23 PM until 5:41 PM while emergency crews removed the driver and vehicles from the roadway.

CHP would like to take this moment to remind people to slow down when the road conditions are wet/snowy/icy.
This is an ongoing investigation being investigated by the California Highway Patrol.

Larry is a great bus driver – he is always putting the kids first!! This was a pure and simple accident.