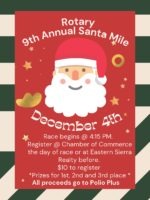 The 9th Annual Bishop Rotary Santa Mile will take place at 4:15 pm  prior to the  Bishop Christmas Parade on Saturday, December 4th.

All proceeds will go to Rotary’s Polio Plus Fund which works towards the eradication of polio world-wide.

There will be prizes for the top 3 male and female finishers, best costume, as well as kids’ prizes.

Polio is a viral disease, spread from person to person and was one of the most dreaded childhood diseases of the 20th century. It can lead to severe and permanent paralysis and disability. By 1919, epidemics of polio cases became regular events throughout the world which left thousands of adults and children paralyzed. We don’t hear much about Polio anymore in the United States as the last cases in this country occurred in 1979.

Rotary’s involvement in polio eradication began in 1979 with a five-year commitment to provide and help deliver polio vaccine to six million children of the Philippines. With the advice and support of the late Dr. Albert Sabin, developer of the oral polio vaccine, Rotary established its PolioPlus program in 1985 to eradicate Polio from the face of the entire Earth.
At the time Polio Plus started, there were 179 countries with active Polio cases and this number had been reduced to 3 (Afganistan, Pakistan, Nigeria).

Rotary has donated over $1 bilion and partners with UNICEF, World Health Organization, Centers for Disease Control, and the Bill and Melinda Gates Foundation among others.
Although we decreased the global number of cases of Polio by 99%, the fight is not over. We must continue to vaccinate children in the countries mentioned above as well as countries such as India, which have become Polio free only within the last 3 years.