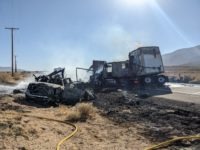 On 11/24/2021 at approximately 11:40 AM, a semi-truck driver from Phelan, CA, was driving a 2011 International semi-truck/trailer, loaded with cardboard. The semi truck was traveling northbound along US-395 just south of Cactus Flats Road near Olancha, CA.

US-395 was closed to all traffic for an extended period of time due to the semi truck blocking all lanes of traffic.

This crash is still under investigation by Bishop CHP. 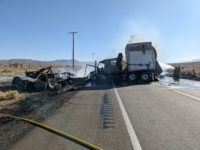 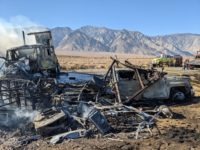 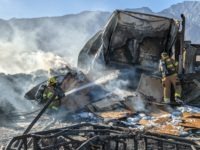 Hi SWM, Many media outlets have moved away from using the term traffic “accident” Although I’m sure this collision was unintentional, the word “accident” can also imply that no one was at fault. The overwhelming majority of traffic collisions are the result of negligence. Approx. 40K deaths per year on… Read more »

Who was negligent herë? You seem to know. If you don’t, you are out of line çasting aspersions.

I spoke to a CHP motor officer that says 90 % of the time when a vehicle is rear-ended , it is the driver that causes the impact that is at fault . Sure, there are some exceptions , and a professional trucker , higher up that the rest of… Read more »

I never claimed to know the details of this incident and I didn’t cast any aspersions on anyone. The point was about terminology. Many news outlets and even emergency response agencies have discontinued the use of the term “accident” – and for good reason IMO.

There is no reason for CalTrans to allow road construction to be done on one of the busiest days of the year for traveling unless it was for emergency work.

So true…they really don’t care when they empede traffic.

Did you mean impede perhaps?
Oh but wait… they’re the ones who make highway travel possible in the first place…