By Press Release on October 5, 2021 in General Misc. Stories 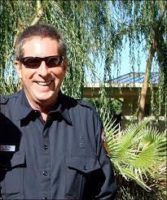 Peter Hein was a much-loved community member of Big Pine and the Eastern Sierra and he is dearly missed.

Video from the 40th Annual National Fallen Firefighters Memorial Weekend can be viewed here. https://www.firehero.org/events/memorial-weekend/. Peter is honored at approximately 45 minutes into the video.

This is the remembrance attached for a touching tribute to Peter.

“We lost a mighty, caring, and generous man on August 11, 2020. Until his untimely passing, he lived life to the fullest!
Born December 7, 1958, in San Anselmo, California, fourth child of Richard and Alice Hein, Peter Alan Hein grew up roaming Mt. Tamalpais. Peter relished hiking, fishing, and camping throughout northern California with family and on his own, especially the Sierra Nevada he grew to know so well. In high school, Peter took up cross country running and completed the grueling Dipsea Race. After graduating in 1977, he completed one year at College of Marin. The following summer he signed on with California Conservation Corps and discovered wildland firefighting. Although he never returned to college, his list of training courses completed filled pages as he sought increasing responsibility
throughout his career.
Pete followed his brother to Mammoth Lakes, California, to fish, hike, and ski. Between seasonal stints with USFS, he worked in ski resort jobs, and in timber management in New Zealand from 1990 to 1992. Back in Mammoth, he met Debra Graham, with whom he had two sons. He loved nothing more than spending time with them outdoors. His return to California also launched fifteen years with USFS, rising to the rank of battalion chief. Switching employers to be nearer to his sons led to ten years with California Department of Forestry & Fire Protection (CAL FIRE). He retired in 2018 as captain. He continued to volunteer with Big Pine VFD and served in Plans and Resources for USFS until his death while working the Stagecoach Fire.
Pete will be missed by all who knew him. He left a legacy of dedication to fire and wildland protection and indelible memories of stories and jokes he loved to share. His memory lives on through sons Trevor and Keenan; sisters, Lora (spouse Nora Carlson), Kristi (spouse Casey
Bazewick), and brother, Eric. Others who will miss him most include his special sidekick, Susan Olito, and loving friend, Claudia Zimmerley, and the boys’ honorary uncle and aunt, Carlton and Gail Gasior. His neighbors in Big Pine lost their unofficial “Mayor Pete,” who shared tools, garden produce, advice, and his rescued cat, Bobby. His lasting impact will also be felt by extended family, friends, neighbors, and colleagues, especially the enormous firefighting family who have honored him as one of their own.
In Pete’s honor, please consider reaching out to someone with an act of kindness and generosity, something he regularly did for others. To grow a garden, you must first plant a seed, and Captain Pete Hein planted many.”