By News Staff on September 23, 2021 in General Misc. Stories 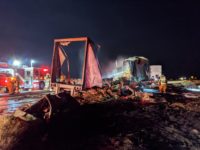 On 09/22/21 at approximately 8:39 PM, CHP responded to a report of a semi truck that was on fire along southbound US-395 on the Sherwin Grade. When units arrived on scene, they located a semi truck and trailer stopped along southbound US-395 and the semi trailer was fully engulfed in flames. Nearby vegetation had caught fire as a result of the vehicle fire. It was later determined the semi truck was transporting 42,000 lbs. of dried dog food. Southbound lanes of US-395 were closed to traffic for an extended period of time while multiple fire departments worked to extinguish the fire. Personnel from Wheeler Crest Fire Dept. Long Valley Fire Dept., Bishop Fire Dept, CalFire, Inyo National Forest Fire, Caltrans, and Bishop CHP responded to the incident scene.

This incident is still under investigation by Bishop CHP.

We work to provide daily news to all of the Eastern Sierra, in the tradition of Eastern Sierra News Service and the Sierra Wave. We bring you daily happenings, local politics, crime, government dealings and fun stuff. Please contact us.
View all posts by News Staff →
State of The Inyo September 22, 2021
Inyo National Forest Welcomes Interagency Fire Management Officer
6 Comments
Newest
Oldest Most Voted
Inline Feedbacks
View all comments

How come its always trucks filled with dog food that catch fire on Sherwin? Isn’t this the third one in as many years?

I was wondering the same thing! I think there may have been 4 in the past 5 or so years. I get that dog food (especially Purina apparently) is flammable….but still. A pretty high percentage of the Sherwin Grade truck fires are full of dog food. Any possible legit or… Read more »

It looks like it was specifically the trailer that caught fire here, so if that’s the pattern… Something about high mass with the friction of all the little flammable kibbles, maybe?

In Walker Canyon, there is a turn we call Budweiser Curve…..at least 3 trucks dumped their load in the River….

Haha! That’s funny Mono, and kinda awesome if you’re on the clean up crew! Just don’t crack it open right away. Now that there’s a good reason people with scanners don’t want law enforcement to encrypt their communications and an excellent incentive for people to volunteer to pick up after… Read more »

Thank you fire crews and CHP.