A group of enthusiastic and hard-working volunteers recently completed a thorough fall clean-up of the grounds at the Eastern California Museum in Independence. 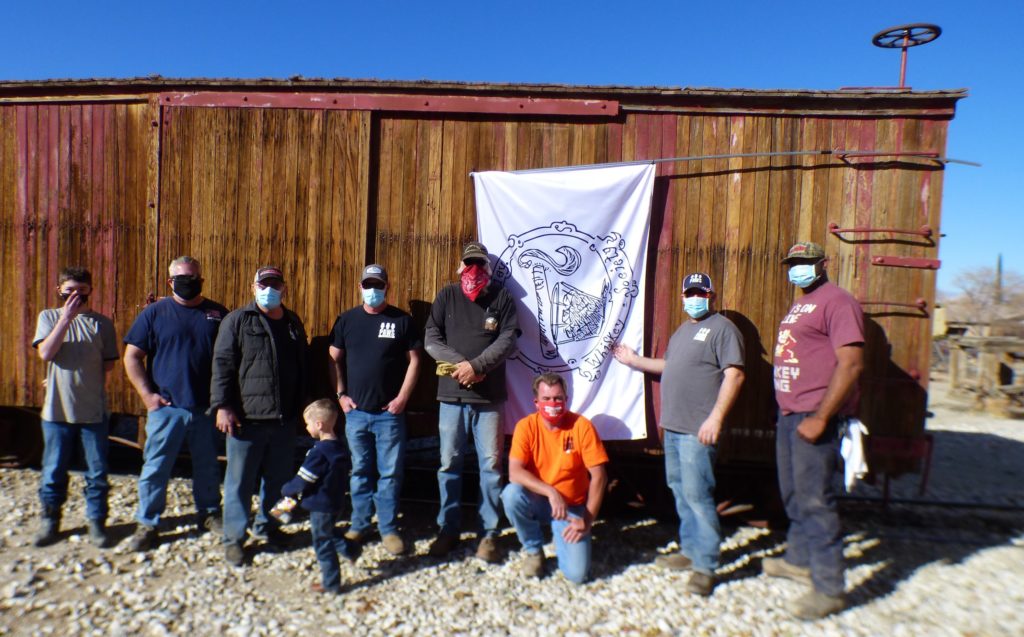 About 20 volunteers showed up armed with rakes, hand tools, shrub trimmers and clippers, and other tools to tackle the daunting task of ridding the five-acre museum grounds of the fallen leaves, dead tree limbs, and overgrown shrubbery that had accumulated over the year. By the end of the work, about 15 loads of “green waste” had been collected and deposited at the Independence dump.

The clean-up project was spearheaded by the non-profit P. Alley Whiskey Society (PAWS), based in Independence (yes, the alleys in Independence have names). The group’s members provided trucks, tools, trailers and the energy and muscle to take on the daunting task. Breakfast and lunch were also provided by PAWS.

“It was an incredible amount of work, and the museum is grateful for the help to keep our grounds clear and safe for visitors,” said Museum Director Jon Klusmire. The work included clearing the front of the museum and around the two parking lots as well as removing leaves from the tree line around the perimeter of the grounds and in the Historic Equipment Yard.

The PAWS nonprofit has about 50 members from throughout the county and the region and has been around for about a year, said Nate Reade, one of the co-founders. Its mission focusses on “charity, education and volunteerism.” The group provides direct help and support to local families and young people in need and also gets involved with projects that benefit the community at large.

Of special interest is providing scholarships to local students attending trade schools, Reade said. PAWS has provided about $1,500 in trade school grant/scholarships. A number other county groups provide college scholarships, but “there seems to be a need for helping students going to trade schools,” he added.

The group accepts tax-deductible donations by mail at PO Box 504, Independence CA 93526, and can be found by searching Facebook for P. Alley Whiskey Society.

Explanation from Mono County on why it was placed in Red rather than Purple Tier
“Oh Christmas Tree, Oh Christmas Tree” | Do you have a tree cutting permit?
1 Comment
Newest
Oldest Most Voted
Inline Feedbacks
View all comments

PAWS did more than clean the museum grounds, they showed pride of ownership to a special learning attraction in the Owens Valley. Thank you from one who has enjoyed learning the history of various people including Paiute, Japanese, and early settlers and cattle ranches— never forgetting the plunder of water… Read more »