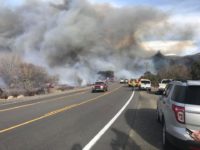 This has been a rapidly changing story. Information will be continued to be posted and revised as it becomes available. News is coming in from various news sources in So. Lake Tahoe, Reno, Mammoth Lakes, and, of course, Facebook groups and official Facebook pages of government agencies. It’s a bit of a mess.

2:00 p.m.: Just when we thought we were done with fires; we receive word that the U.S. Highway of 395 has been closed from Bridgeport to the Nevada Stateline due to fire which started around noon and has been made worse by high winds strong enough to have even toppled big rigs.  Sierra Front Interagency Dispatch Center reports that it may have started with a downed power line. The fire is being referred to as The Mountain View Fire.

Due to the fast-moving nature of the fire, an evacuation Order was issued in the Coleville, Walker and Topaz, according to Mono County Sheriff’s Office. The Mountain View Fire has grown to 5,000 acres in under three hours, having started just after 12:00 p.m. US395 is closed through the area. Travelers will need to take alternate routes depending on their destination.

At approximately 4pm, Sheriff Braun was reported as telling the Mammoth Times that “multiple structures have burned near Walker, and there has been one death. The fire is spreading uncontrollably, the winds erratic and super strong, fire on both sides of U.S. 395 and more. The fire seems to have started near the Mountain View Barbeque in Walker area but is not believed to be linked to it; the cause of the fire is unknown.” The sheriff says that the fire is “raging out of control.
As of 5:31 pm, CalFire reports that the fire is 0% contained.
MCSO Facebook posted the following on their Facebook page today at 1:03 pm:

Residents that have been evacuated wanting to stay at the lodge will need to check in with the Red Cross PRIOR to checking in or we cannot assure that Red Cross will cover their lodging. Residents will be put on a wait list until we can get approval from Red Cross then be given a voucher to check in.
Due to a fast-moving fire, an evacuation Order has been issued in the Coleville, Walker and Topaz area. This is a lawful order to leave now.
395 is closed from Bridgeport to the Nevada Stateline.
Due to the fire in Walker area, Liberty Utilities has de-energized the communities of Walker and Coleville up to Topaz at Stateline for safety precautions. Liberty is working with all emergency agencies and will safely restore power when possible. No estimated restoration time is currently available. Sheriff Braun has emphasized that this is a lawful order to leave now.  It has been reported to be burning on both sides of U.S. Highway 395.
#mountainviewfire

Due to the fire in Walker area, Liberty Utilities has de-energized the communities of Walker and Coleville up to Topaz at Stateline for safety precautions. So, there is no power in the area. Liberty is working with all emergency agencies and will safely restore power when possible. No estimated restoration time is currently available. 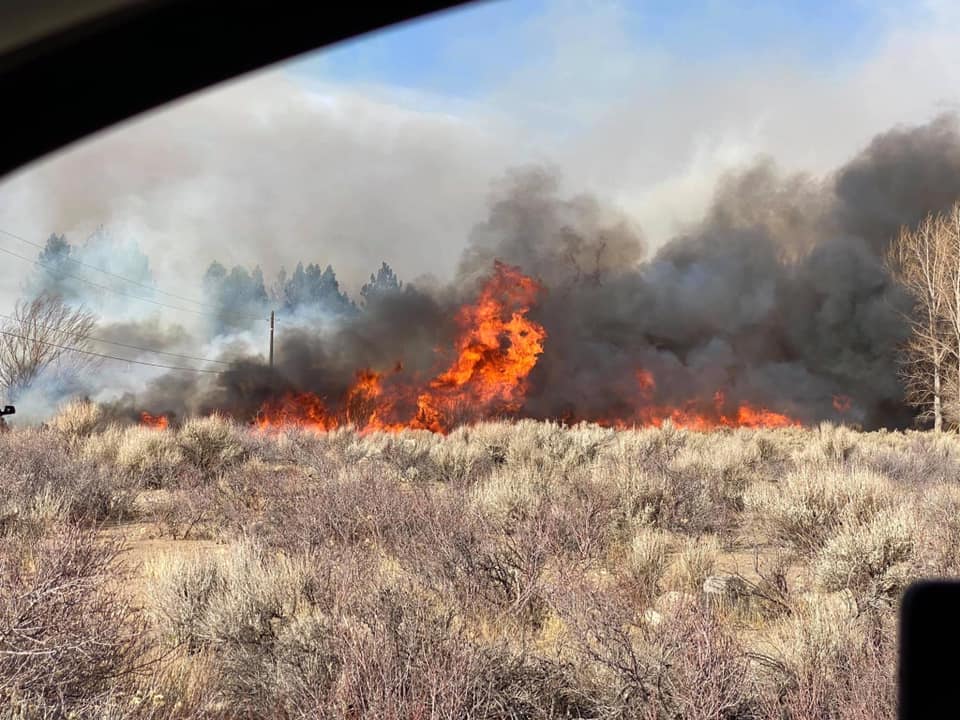 Warnings have been issued to all drivers by Caltrans District 9 that due to a fire in Walker Canyon, U.S. Highway 395 has been temporarily closed from Emigrant Street in Bridgeport to the Nevada 208. Drivers heading in that direction should seek an alternative route.

Terrible news.2020 what else will happen

Anyone whose home has burned in the Mountainview Fire is welcome to join our Wildfire Home Loss Support group:

When donating clothes, make sure they are CLEARLY marked with sizes. Especially in the age of covid, they should be new or appropriately cleaned. Otherwise it just creates a messy heap for fire victims and helpers. Best to find out what people actually need before donating.

One of the best ways to help is with cash donations to the American Red Cross. They issue vouchers for clothing, etc., which can be spent locally to help the community recover. You can specify where you want the donation to be used.

We are trying to organize a donation center for the Walker area. We are hoping to use the Bridgeport Memorial Hall as a drop off center for necessities – clothing, bedding, pet food, toiletries, etc. We need to find out out, what they actually need, so more information to follow! Keep the people of Antelope Valley in your hearts!

If you want Sierra Wave to help get the word out on how to help the people that need it in Walker, please send us an email with the information: Days, Dates, Times, Location/s, Types of Donations requested, contact person and contact information, etc. We’ll do what we can to help the people of Walker get back on their feet.
BTW, don’t forget the American Red Cross and Salvation Army, two excellent sources for helping people recover from a disaster.

I will definitely post tomorrow, when we find out what they need! Thank you so much for your help and guidance!!