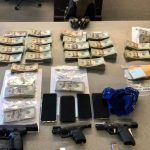 You’d think that if you had $100,665 in cash on you, you could afford to have your taillights fixed.

It’s amazing how crooks get caught over the dumbest things.

LONE PINE, CA, June 10, 2020 – Shortly after midnight on June 9, Inyo County Sheriff’s Deputies conducted a traffic stop in Lone Pine on a vehicle with no tail lights. During the traffic stop Deputies detected a strong smell of marijuana emitting from the vehicle. While temporarily detaining the four occupants of the vehicle, Deputies observed a loaded handgun under the driver’s side seat.

Due to improper storage of a loaded handgun, and the strong smell of marijuana, a canine search of the vehicle was conducted. The vehicle search revealed two additional loaded handguns, narcotics, and $100,665 in cash packaged in shrink wrapped plastic.

All four suspects were arrested for weapon and narcotics charges and are being held at the Inyo County Jail; bail has been set at $75,000 for each.

what ever you call it less money means less protection !!!

Charles , the Sheriff dept covers every other city in this county just fine. Do you know who to call if you live on the Reservation ?
It just makes sense to all be on the same page.

This may not be the right time to address this issue,
but I do think our County Sheriffs are more professional and treat people better then Bishop PD. I think Bishop should contract out to our county officials. Or at least look into it.

This is a topic that seems to come up every few years, usually when the city is dealing with substantial budget deficits as a result of a poor economy. My impression of the current Bishop Police Department is that it is well-run, professional, and has very good, even exceptional leadership.… Read more »

June Bug “defunding” is a dumb word they use. Should maybe be “re-routing” some money and form programs and training,maybe deep background checks on some of these few officers that claim to want to “protect and serve” but have other agendas. When I was in high school long ago,I had… Read more »

So defund the police doesn’t mean get rid of the police. If you take money away from police departments how will they pay for the same number of policemen. Answer they can’t, they will have to reduce their numbers to balance their budget. That’s a no brainer, how can you… Read more »

Lori Your wasting your time trying to explain that to some that believe and have it embedded in their minds,what they’re being “told” and how to think. Much like the issue with the kneeling in protest. Nothing about disrespect for the American Flag,but they are TOLD that’s what it means,back… Read more »

Late last week Rep. Ilan Omar D Minneapolis, stated that Law enforcement should be completely DISBANDED in Minneapolis. This was followed by the city council drafting a veto-proof order to do the same. No, this was not from Fox news. Start looking at other sourses besides your leftist rags David

To Steve, or anyone else: No one is saying “Get rid of police” when they say defund. They are mostly saying “police aren’t mental health experts, and shouldn’t be put in positions they are not qualified for.“ It endangers the public *and* LE. No one is saying, “We hate police/laws/etc.”.… Read more »

Funny they made it half way across the county for such sharp cops. They might as well had a billboard and almost made it. Real sharp.

I lived in the Owens Valley several years ago. In my limited interactions with the local sheriff’s deputies, I found them very polite, helpful and respectful. This includes the times I was clearly in the wrong.

With all the crap going on in America now concerning Law Enforcement,isn’t it nice to have a good and respectful ICSO here to have around and deal with ?..This is a REALLY good bust and sends a really strong message to others using our streets and highways as a drug… Read more »

you idiots still want to get rid of law enforcement ?

No one in this area has advocated for that issue, and it is highly doubtful they would. Small communities, generally good policing, and people that look out for each other.

Steve When are YOU id*ots going to stop with the lies about wanting to “get rid of Law Enforcement”? The ones saying that aren’t even a small minority,including those such as Joe Biden and Democrats,like the right-wing liars are trying to spin it. I read on one site where they… Read more »

Steve, yes I do think we need to get ride of Bishop Police Dept and transfer that responsibility to the Sheriffs dept. Bishop PD had their chance and acted like they were invisible with it for to long. Don’t tell me I’m trying to get rid of law enforcement. We… Read more »