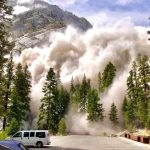 There was definitely some ground movement this morning at 10:40 a.m. It has been reported that a magnitude 5.8 earthquake occurred 12 miles south of the town of Lone Pine, according to the U.S. Geological Survey. Social media immediately took note of the earthquake, which was felt as far away as Los Angeles, Las Vegas, Central Valley and Southern California. Lone Pine, Independence, Big Pine and Bishop have not reported any serious damage to structures or injuries.

A quick call to the Inyo County Public Information Officer, Carma Roper, at the Inyo County Sheriff’s Office, found that no damage had as yet been reported other than a possible rock slide in the area, which they were on there way to investigate. Later it was reported that there might be injuries as a result of the rock slide, but that has not yet been confirmed. Lone Pine Fire Department has responded along with the Sheriff’s Department. 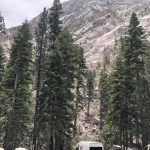 [Sheriff Update 2:14 pm: Whitney Portal area is closed and campgrounds are being evacuated due to rock slide south of the main parking lot. No injuries reported at this time. It is unclear at this time if the main Mt Whitney trail has been affected. It is believed that this slide was triggered by the recent 5.8 earthquake near the Lone Pine area.

We are assessing a reported rockslide on Whitney Portal Road and reported debris on Horseshoe Meadows Road. No additional information is known at this time. All updates will be posted.] 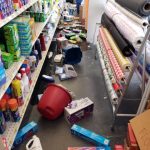 Kathleen New, the Chamber of Commerce Executive Director in Lone Pine, reported that they exited the office as soon as the ground started moving and that, “I was really surprised at how long it lasted.” She had no reports of damage other than next door at Gardner’s Hardware, which she said “Was a bit of a mess.” She was going to go over to help the owners “clean up.”

Sierra Wave’s Kat Greenman was in Lone Pine in front of Lee’s Frontier Liquor & Deli & Gas when the earthquake hit. She said it scared the **** out of her! She had never been outside during one and she said that it almost caused her to lose her balance, something that’s never before happened.

Kathy Chambers, the librarian at the Lone Pine Library, told Sierra Wave that she was at home when the earthquake struck, but went immediately to the library (which was closed due to the coronavirus pandemic) to assess the damage. She said there’s plenty of books on the floor and that in one aisle in particular, she couldn’t even walk down it. 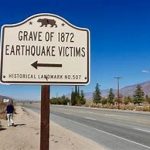 Lone Pine is no stranger to earthquakes. Just days prior to today’s shaker, the area has experienced several small earthquakes which are reportedly taken place under the Owens Dry Lake Bed.

In 1872 on March 26, the Owens Valley earthquake (a.k.a., Lone Pine earthquake) killed twenty-seven people and injured fifty-six.  It had a magnitude 7.4 to 7.9 and was one of the largest earthquakes to hit California in recorded history, similar in size to the 1906 San Francisco earthquake.

Sierra Wave will keep you posted as more information comes in.

This a much superior way to learn what people’s houses are like on the inside rather than zoom meetings. More testimonials, please!

Was Kat attempting to procuring gas, liquor or deli meats?

This is Kat and I was there for the Grand OIpoening of Jersey Mike’s and was out front filming when I was ALMOST KNOOCKED TO THE GROUND.

Dennis Smith LOL !! I had a lot of my Elephant figurines fall off the shelf and onto the floor. A couple boxes of .22 Long Rifle shells,two Zippo lighters,and my souvenir Hawaiian dancing girl making it to the ground, Lots of pictures on the wall sideways now. My Desert… Read more »

Wow, you used our photo….Awesome!

What I meant to say was the 4.6 on Monday was just a sharp Jolt. Compared to the Quake Today.

We have a personal library of approx. 1,100 to 1,250 books. on shelves up to the ceiling. Over the past 25 years, through all the earthquakes, nothing ever fell….until today. Got knocked on the head a few times by Steven King and Dr. Andrew Weil. Oh, I can’t forget the… Read more »

It was like a Freight was running through my place in Olancha, lasted quite awhile, everything was rock and rolling here. I felt the 6.4 it was just a sharp Jolt, this one was way more powerful.

It knocked a lot of stuff off my shelves at home…

Gardner’s had some merchandise fall, but Lone Pine Market was hit much harder. Walls swayed, parts of the ceiling fell and a couple of jolts near the end, popped open cabinet doors and covered the isles in broken glass. Wild ride! Our home, eight miles west, only had one item… Read more »

Felt it in the Mustang Mesa. Seems like it lasted 9 sec.’s. Got stronger towards the end. Earthquakes seem to be the new norm this year in the Owen’s Valley.

Live in line Pine. We lost some vintage ware falling out of buffet and a sentimental guitar fell off top of bookcase where we displayed it and the neck snapped. Closet hinged door opened and 2 vases fell out and broke. Weirdly in afternoon got humid and overcast and rained… Read more »