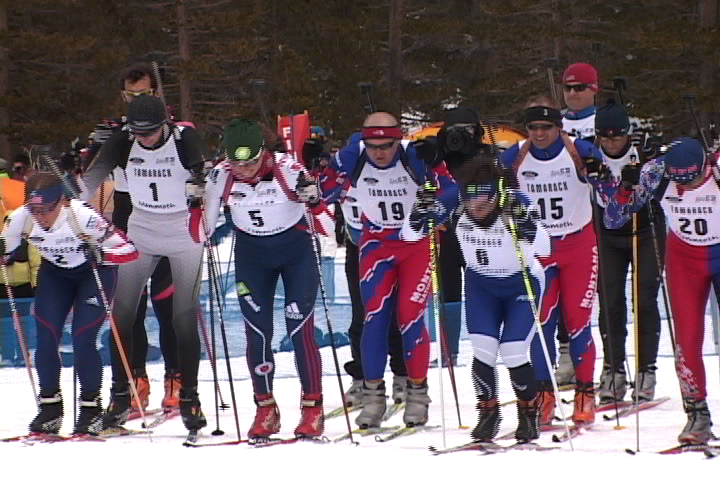 Poor weather conditions last week during the 4th Annual Mammoth Winter Biathlon resulted in the cancellation of the shooting portion of the event on Saturday, March 26th and delayed the start of the race on Sunday, March 27th.

As conditions improved on Sunday, race organizers were able to stage the full event on the Upper Lakes Basin cross-country track at Tamarack Lodge.

The event drew over 200 racers from the local community and around the country, including members of the US Olympic Winter Biathlon team, as well as a number of international participants.

The sport, which began as a Military Patrol event in the 1924 Winter Olympics in Chamonix, France, only debuted as an official Olympic sport at the Squaw Valley Winter Olympics in 1960. Based in its military heritage the sport consists of two disciplines, cross country skiing and target shooting.
Four divisions of racing were held on Sunday – Intermediate Adults, Advanced Adults, National Guard and Elite for both men and women.

Both the men’s and women’s Elite races were hotly contested and spectators were treated to excellent skiing and shooting and exciting sprint finishes.

In the men’s Elite race, Raleigh Goessling and Wynn Roberts lead the pack together in the early laps, but perfect marksmanship by Roberts during one round of shooting gave him the outright lead, while Goessling was required to complete the penalty laps for his missed shots. Unable to regain the lead Goessling placed second behind Roberts who finished in a time of 30 minutes, 11 seconds.

Competitors were ceded into groups of 20 for each division and races were set off in phases. This provided for great spectator viewing, as there were racers out on the course and on the shooting range throughout the day. Faster racers from later phases caught up with slower racers from earlier phases and professional announcer, Whit Raymond, kept the crowd informed and entertained.

The last races of the day set off in deteriorating weather conditions, but the enthusiasm of the athletes and spectators remained high until the final racer was in and the awards presented to the winners.

The event was a great success for both competitors and spectators and race organizers hope to draw bigger crowds and more athletes in the years to come.

We work to provide daily news to all of the Eastern Sierra, in the tradition of Eastern Sierra News Service and the Sierra Wave. We bring you daily happenings, local politics, crime, government dealings and fun stuff. Please contact us.
View all posts by News Staff →
MLPD officers took orders and served
Off-highway vehicle trail plan moves along