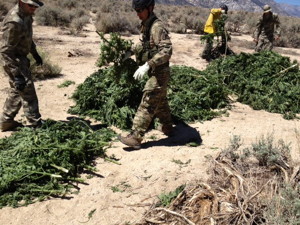 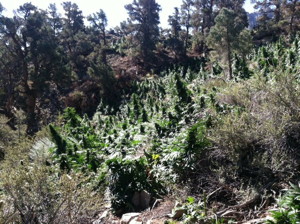 (PRESS RELEASE – Carma Roper, Inyo Sheriff PIO) On August 22nd a massive multiagency eradication operation was successfully accomplished above Hogback Creek west of Lone Pine, CA.  Inyo Narcotics Enforcement Team (INET) and agents from the United States Forest Service have been investigating this particular grow-site and gathering evidence since May, 2013. Approximately 4,000 marijuana plants were removed from the site, as well as 350 pounds of processed marijuana. 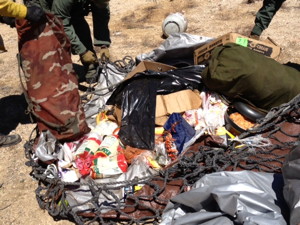 Marijuana cultivation causes extreme damage to ecosystems.  As part of the illegal cultivation process, growers are responsible for using miles of plastic tubing and diverting water from natural sources for crop irrigation.  The use of banned herbicides and pesticides is also common practice.  Massive amounts of trash and chemicals were transported from the Hogback cultivation site; the estimated quantity is at minimum 2,000 pounds.   In addition, officers located banned hazardous materials which required the response of a Hazmat professional.

The Inyo County Sheriff’s Department, as well as all agencies assisting in the eradication operation, want to remind residents and visitors of the dangers that are inherent in marijuana cultivation.  As soon as you become aware that you have come upon a cultivation site, leave immediately.  Do not attempt to engage with the growers.  Once in a safe place, report as much details about the location to law enforcement.