The small water war between the residents of 40 acres and LADWP continues, but as the legal skirmishes carry on, the situation can now be described as a tentative stalemate likely headed for a negotiated truce. The contention all along has surrounded the question of who should control the water to 40 acres northwest of Bishop and how much water each side 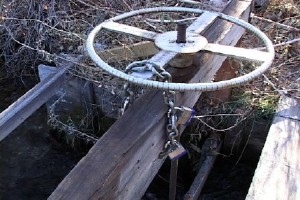 Water flows out of Pine Creek and into a ditch system that provides 40 acres with irrigation, fish ponds and water for fighting fires. The residents use some of the water and more flows through the community back to DWP land.

Five years ago, when we first reported on this story, residents of 40 acres had to turn their water up on a daily basis after DWP turned it down. Since then, the residents have organized, and DWP staff has cut back on adjusting the water to 40 acres. Thaddeus Talyor with the 40 Acres Water Association reports that these days the residents take turns heading up the hill to turn the water back up. He says that DWP still does turn the water down, but it hasnt been much of a problem lately.

In years past, residents had cut locks off the weir controls. Now two locks, one for the residents, and one for DWP, are used to keep the weir secure.

At a community meeting in 2006, DWP staff put the burden on the residents of 40 acres saying that the entire situation would go away if the residents could prove they have water rights. Residents have photos that show Paiute Jack Wright irrigating on homestead land at 40 acres in the 1890s.

The residents continue to push DWP to release records on flow rates and use at 40 acres, but there may be an agreement in the future. Negotiation or court were always two of the possible outcomes of this issue. So far, negotiation appears to have won the day. Taylor now reports that the two sides may be headed for a deal, but there was no timeline for any possible agreement at last word.

We work to provide daily news to all of the Eastern Sierra, in the tradition of Eastern Sierra News Service and the Sierra Wave. We bring you daily happenings, local politics, crime, government dealings and fun stuff. Please contact us.
View all posts by News Staff →
Mammoth Officials Look Forward to More Legal Fees
Volunteers Help Oil Soaked Owl