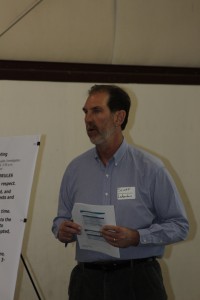 The information session organized by the County was more than a hydrology primer. The meeting was called to update residents of Olancha and Cartago on the progress made to determine the extent of groundwater contamination from Crystal Geyser Roxanne’s leaking Arsenic Pond.
Staff from Inyo County, the Lahontan Regional Water Quality Control Board, consultants Geosyntec and the water bottling operation provided background and progress on the investigation, initiated in July 2014.
Lahontan and Crystal Geyser staff will be meeting today to go over work plans for Phase 3 of the investigation in a process that will end with mitigation and remediation.
The issue: Crystal Geyser had three discharge ponds used for arsenic and other contaminants filtered out of the water. Two were lined, one wasn’t. The liner in the Arsenic Pond degraded, allowing the contaminants to percolate into the groundwater. 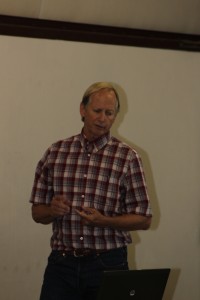 Geosyntec was hired to determine the extent of the contamination. Hazardous waste is now trucked out of the area for disposal. Arsenic Pond was shut down; the company still discharges waste into East and Fire ponds, but the discharges contain no arsenic.
Mark Grivetti, a geohydrologist from Geosyntec, explained that the groundwater under the ponds moves northwest, toward Owens Lake. While the limits of the contamination have yet to be nailed down, that movement pretty much precludes contamination of wells in the Cartago area.
To reassure residents, District 5 Supervisor Matt Kingsley announced the County would foot the bill to have private wells in Cartago tested.
Arsenic and a number of other elements, dangerous at specific levels, are a product of the journey surface water takes on its way to the groundwater basins.
Travelling down the mountain and through the alluvial fans, water picks up all the minerals present in its pathway. The water picks up even larger concentrations of arsenic in the clay layers in the soil east of the water bottling plant.
The acceptable level of arsenic in drinking water is 10 parts per billion; the danger in the contaminated areas is the concentration of arsenic filtered out of the water before bottling.
Once the residents got a rundown on the steps being taken, questions turned to “how did this happen?” Nobody had the answer, but County Environmental Health Director Marvin Moskowitz was fairly certain nothing like it would ever happen again in Inyo.
Crystal Geyser applied for and received a permit for the ponds from the County. But somewhere in the process, the fact the ponds would contain high concentrations of arsenic got missed.
“We called it Arsenic Pond,” said Page Beykpour, chief operations officer for Crystal Geyser. “If we’d wanted to hide something, we’d have called it Rainbow Pond.”
Moskowitz explained that construction permits are processed through Public Works. That department then sends out transmittal slips to Planning and Environmental Health to make sure all the bases are covered.
“I did a file review back to 1980,” said Moskowitz, “and didn’t find a transmittal slip.” Nobody in those departments was on staff in 1980, he said. “We’re all culpable. Crystal Geyser should have known a permit was required for waste discharge.”
Beykpour admitted the company didn’t have a permit from Lahontan. “We got permits to put in the pond in 2003,” he said. “We were inspected by the Food and Drug Administration. There were levels of approval.”
Scott Ferguson, division manager from Lahontan, went through the first two phases of the investigation. The first was easy: probes indicated there was arsenic at elevated levels in the groundwater under the leaking pond.
Phase two involved multiple monitoring wells that turned up fairly consistent 7 to 15 ppb in some areas but 636 ppb in the direction of water movement. Results from the monitoring wells has been so variable, Ferguson said the company will be looking at quarterly monitoring.
Crystal Geyser applied for and received a Conditional Use Permit to expand its operation with a 200,000 square foot facility on Cabin Bar land. In 2011, a groundwater model was done to determine the flow of groundwater.
“We can determine the capture zone of wells are drawing from the west (at Cabin Bar) through permeable sediment,” said Grivetti.
The conclusion, the deep pumping wells for the bottling company and community wells north of the current plant site won’t have levels of arsenic above acceptable levels.
An additional proof of that theory is the volume of water from deep aquifer wells initially bored by Anheuser Busch, currently used for irrigation,  has not pulled water from the contaminated, shallower aquifers.
Crystal Geyser will be required to secure a permit from Lahontan for any discharge from the Cabin Bar location. Planning Department Director Josh Hart said the County could modify the Conditional Use Permit for the Cabin Bar operation, depending on the result of the Lahontan investigation.
Phase 3 will further expand the scope of work with additional monitoring wells to determine the farthest extent of contamination. “Contaminated soil removal will be part of the mitigation/remedial work,” Ferguson explained.
Currently, there is a liner on top of the drained Arsenic Pond to keep the contaminants from being driven further into the ground.
Grivetti “didn’t expect arsenic levels to reach deep aquifers.” Still, Phase 3 will determine any vertical flow.
Following the formal presentations, Hart fielded questions from the audience, filling in some of the blanks:
One of the discharge ponds released water into a wetland. Geosyntec is looking at arsenic levels in those wetlands as part of its investigation. There is no water currently flowing into wetland areas.
To reinforce the theory that contaminated groundwater is not moving north, toward Cartago’s private wells, Phase 3 will include monitoring wells between the identified contamination and Cartago.
The new facility at Cabin Bar, when completed, will have a pumping limit of 600,000 gallons a day. The current Olancha facility has no limit. California did not regulate groundwater basins until the passage of the Sustainable Groundwater Management Act in late 2014.
The state Department of Toxic Substance Control is tracking the transportation and disposal of the waste from the bottling plant.
Robert Bowcock with Integrated Resource Management, Inc. questioned Lahontan, Grivetti and Beykpour on levels of other contaminates from the discharge ponds. His firm was hired by and has filed a lawsuit on behalf of the Cartago Mutual Water Company.
His line of questioning did not please Beykpour.
Other areas of frustration expressed by those in attendance involved lack of information, especially those with no computer access.
Both the County Planning Department and Lahontan said full information on the progress of the investigation would be posted on their websites (www.waterboards.ca.gov/lahontan/water_issues/programs/enforcement/ crystal_geyser_olancha.shtml). Lahontan may explore the possibility of sending out a newsletter to area residents.

They should nail them hard, they are draining and contaminating our aquifiers around this area I am wondering why DWP will let them get away with this practice?