In the early afternoon of Thursday, February 25, 2016, Mono County Sheriff’s Deputies responded to Adobe Ranch Road, south of Highway 120 East, to investigate a report of a squatter in a vacant cabin. 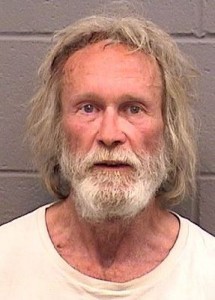 The suspect, later identified as William Ward, broke into the property and illegally took up residence.

A deputy spotted Mr. Ward driving an older sport utility vehicle toward him on a narrow dirt road. As the truck approached, the deputy blocked the road with his patrol vehicle and turned on his light bar.

Two deputies and a sergeant gave chase, eventually returning to the cabin.

Mr. Ward took refuge in the cabin, and the pursuing deputies took positions of cover and ordered him to surrender.

A request was made for additional resources, and law enforcement officers from throughout Mono and Inyo Counties, along with support from medics and CalTrans, immediately deployed to the scene.

As the afternoon grew into evening, Mr. Ward exited the cabin, armed with a rifle, and fired in the direction of law enforcement, shouting that they would have to kill him.

Mr. Ward barricaded himself in the cabin, and it was clear he had no intention of ending the stand-off peacefully. A coordinated plan was put into place to
diminish Mr. Ward’s capabilities, while allowing responding personnel to safely take him into custody.

Tear gas was deployed into the cabin, and team entered the cabin. Although Mr. Ward was still armed and fought being arrested, the team successfully disarmed him and took him down without significant injury.

Medics were standing by and treated Mr. Ward for exposure to tear gas. No responding personnel suffered injury during this incident.

Seems more and more dangerous people coming to both Into and Mono Counties.

It really sounds like the officers did everything they could to deescalate the situation without using unnecessary force. I have a lot of respect for the Sheriff’s department and all the emergency personnel for how they handled this very dangerous and difficult situation. After seeing reports of excessive force/police brutality… Read more »

Taco…..If the laws work,no problems…..but they don’t….I recently watched a “Dateline” on T.V.,where they hired an ex-felon,with police presence on site, wearing a camera and giving him money,to go into a gun show and try to purchase firearms….the seller sold the ex-felon a rifle and a pistol,he came out to,dropped… Read more »

Ban older SUV’s. Used as weapons too many times…

Bad guy in custody. No one hurt. Well done.

Props to responding officers for using tactics that included self-restraint. Mr. Ward is fortunate to still be among the living, IMHO.

Too bad that I as a tax payer will have to be funding him the rest of his life….

If he shot at a police officer he deserves many years in jail. I’m not a fan of jail, except for the truly violent and dangerous. Does that answer your question lower inyo?

Taco, post an address and I’ll refund your I as a taxpayer tax burden for Mr. Wards care, which would most likely be about a dime for your share.

Hey Trouble !!….Is this someone you feel should be able to keep and bear arms and/or possess a CCW ?….if so,I hope the next vacant house he moves himself into is nextdoor to where you live.

Convicted felons are not permitted to posses firearms.

tinner….they’re not “supposed” to posses firearms…..something tells me this guy was probably a convicted felon long before this incident…..and he had one…..maybe he can’t legally purchase one,but a firearm for anyone is a mouse-click away….long gun or pistol.

By all means back that last sentence up. how can anyone get a firearm just a mouse click away. I know your just dinking from the anti gun Kool-Aid but since you stated it you need to back it up. “If you can”

Taco….I’m far from anti-gun….I have guns,and had a CCW for 10 years living in Oregon..I’m anti-gun only when stupid people can easily get them…and when stupid people think ANYONE should be able to buy and own them….and I can easily “back-up” that last sentence,as you request….go to the “for sale… Read more »

Low-Inyo. Being s gun owner would you be dumb enough to sell a gun without going through an FFL? I know I sure as hell wouldn’t. Why would I want to risk selling a gun private party and leave the liability open for myself to still be the registered owner… Read more »

Really ????….Since I don’t buy or sell guns on-line,at gun shows or through the want ads,I don’t really know much about an FFL in California…..but from what I see,that sounds like more for gun dealers and not private party sales……and if I were selling,I would want some type of release… Read more »

Low-Inyo, You obviously have no clue how Private Party transfers are done in California, let me educate you so your no longer ignorant on the process. 1. You find a buyer. 2. Buyer most posses a Handgun Saftey Certificate ( you must take a test to get it) or California… Read more »

Low-Inyo, the article reads: “Mr. Ward had felony convictions for weapons-related offenses and had been incarcerated in state prison twice for those offenses.” And you stated something tells me… Criminals and convicted felons won’t always obey our laws and they won’t always choose abandoned cabin’s and the cops can’t always… Read more »

Hey Low-boy…I thought you were PRO 2nd ammendment, what happened ? I can remember more than once where you stated you were armed and glad of it. Guns are for responsible , level-headed people who want to protect themselves from morons like this guy. He probably STOLE the gun he… Read more »

Good Job, sounds as this one could have ended more tragically.