By News Staff on May 15, 2018 in Entertainment/Local Events/Activities, General Misc. Stories, Public Event

360 Degrees of Adventure, Mammoth Lakes Tourism’s Virtual Reality video was officially honored for 360, AR, VR and Emerging Tech at the 3rd annual Brand Film Festival at The Paley Center for Media on May 3, 2018. 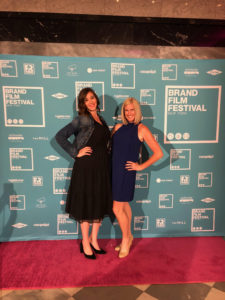 MLT Director of Marketing, Whitney Lennon (right) and Amanda Moul of MeringCarson were on hand at the festival to receive the video honors.

“We are truly honored to be included in this year’s list of honorees,” said Whitney Lennon, Director of Marketing for Mammoth Lakes Tourism. “This award is a true testament to what can be accomplished by a small, but passionate group of dreamers who thrive on creating a true human connection.”

This year’s jury chair was Jae Goodman, CEO of Observatory (formerly CAA Marketing), a long-term advocate of brand filmmaking as the natural evolution of interruptive advertising whose watershed moment came when he found himself fast-forwarding through one of his own ads while watching TV at home.

“Cinematic storytelling is now fundamental to brand marketing, and the Brand Film Festival celebrates the most creative films in that context,” said PRWeek VP, editorial director, Steve Barrett. “Video of all types, from short-form executions of just a few seconds to long-form documentaries of 60 minutes or more, is now a
central part of the marketing playbook.”

The Brand Film Festival honors a new generation of marketing storytellers, while rewarding the brands, agencies, and craftspeople leading the way in their fields.

“The caliber of films this year was remarkably high, and competition to be selected for the festival intense,” said Barrett. “To be chosen for this year’s festival, brands really needed to show the jurors something they hadn’t seen before. This year’s honorees really do represent the best of today’s branded films.”

For more information about the 2018 Brand Film Festival and to view the films, please
visit www.brandfilmfestival.com