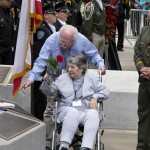 At this year’s Memorial Event, Mono County Sheriff’s Office honored one of their own as Deputy William Franklin Edwards was enrolled and placed on the California Peace Officer Memorial Wall. Deputy Edwards was killed in the line of duty on April 29th, 1907, when he responded to arrest three intoxicated male subjects in the Benton area. Deputy Edwards contacted the men by an “old mill” with the assistance of several others. A struggle ensued over a weapon which was wrested from Deputy Edwards. The male immediately fired once striking Deputy Edwards in the arm, passing through his chest, and killing him instantly.

Through the hard work and research conducted by Lt. Phil West, Mono County Sheriff’s Office Historian, Deputy Edwards was proudly honored at the 2013 California Peace Officers Memorial Event. Deputy Edwards will also be honored and placed on the National Peace Officers Memorial in Washington, D.C., on Monday, May 13th, 2013, at the candle light vigil for the start of National Law Enforcement Week (May 12– 18).

Deputy Edwards’ family was present at the Memorial Ceremony and extended their utmost thanks to Sheriff Obenberger, Lt. West and the Mono County Sheriff’s Office for their dedication in having Deputy Edwards honored, remembered, and placed on both Memorial Walls over 100 years later.

Digusted with the irony

Funny they honor a deputy that died 106 years ago, but they treat their current living deputies with dishonor and disrespect. Making laughing stalks of their own, by their persecution and their complete and utter lack of humanity. Shame on you Phil West for being the president of your DSA… Read more »