– Press release from the City of Bishop:

The City of Bishop would like to congratulate the 2013 Men’s league champions West Bishop. 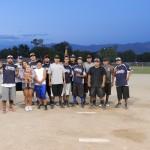 West Bishop had a season record of 9-1, and played three tough games in the playoffs to take the championship. The championship game was on August 7 at 7:00 on field one at the Bishop City Park against Sweetwater; it was a very intense game with a final score of 17-16. 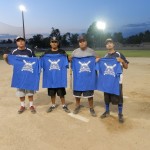 We work to provide daily news to all of the Eastern Sierra, in the tradition of Eastern Sierra News Service and the Sierra Wave. We bring you daily happenings, local politics, crime, government dealings and fun stuff. Please contact us.
View all posts by News Staff →
Final Aspen Fire report
Eastern Sierra Audubon Society events