By News Staff on March 6, 2013 in Government Agencies/Utilities 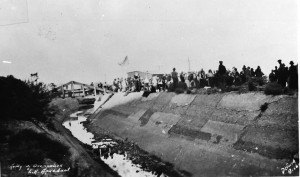 John Walton, the author of the most thorough book about how the Owens Valley has been shaped by its tumultuous, century long, water-fed relationship with the City of Los Angles, will be the guest speaker at the Friends of the Eastern California annual meeting on Saturday, March 9, in Independence.

The public is also invited to meet Walton beforehand, starting at 4 p.m., when he will be at the Eastern California Museum, at 155 N. Grant St., in Independence, for a reception and to sign copies of his well-known book, “Western Times and 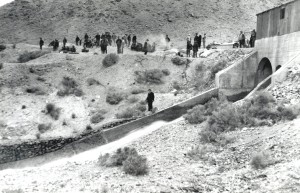 The “Army of Occupation” at the Alabama Gates in November, 1924. Photo courtesy Eastern California Museum.

The “Army of Occupation” at the Alabama Gates in November, 1924. Photo courtesy Eastern California Museum.

The FECM Annual Meeting will be held in the Independence Legion Hall, at the corner of Edwards (US 395) and Kearsarge streets. A potluck dinner will start at 5:30 p.m., followed by a brief business meeting, then Walton’s presentation. The public is invited to the potluck and presentation.

“Western Times and Water Wars” does more than simply recite the history of the Owens Valley and the “water wars” with Los Angeles. Walton uses the specifics of the Owens Valley’s past to show how larger, regional and national trends not only impacted the Owens Valley, but also had parallels in the development of the West.

However, he notes that the Owens Valley is rather unique in the West because it’s history has been so closely intertwined with Los Angeles, thanks to the city’s successful effort to secure most of the valley’s water rights and send that water south via the Los Angeles Aqueduct, starting in 1913, to fed the growing, thirsty city. That event created almost a perpetual state of rebellion in the Owens Valley for the past 100 years. The rebellion took various forms. Most visible was the “occupation” of the Alabama Gates in 1924, which saw hundreds of Inyo County residents take over the gates and turn the water into the valley floor. Dynamiting and other acts of sabotage also garnered lurid headlines. Generating publicity, sympathy and, often support from other entities not enamored of Los Angeles, would be one of the area’s more successful tactics, whether it involved the export of water in the 1930s, the “draining” of Mono Lake in the 1970s, or the dust storms coming off the Owens Dry Lake in the 2000s.

After the initial, violent protests, the valley’s residents also used state law and the courts in the 1930s to advance their cause and, in some cases, put limits on the actions of Los Angeles. Those initial legislative and legal victories (including one limiting groundwater pumping in the Bishop area) created the template for the current legal framework of the Long Term Water Agreement and other legal actions involving the Owens Valley and Los Angeles.

But Walton, who is a professor of Sociology and Anthropology at the University of California, Davis, also puts those “unique” events in a broader historical context. For example, the settling of the valley and conquest of the native Paiutes followed patterns familiar throughout the West. Federal policies and laws provided free land, and the US Army subjugated the Paiutes, clearing the way for the pioneers to settle the valley. Once the Paiutes were subdued, they were excluded from the valley’s political and legal life. They did, however, play a critical role in the local economy by virtue of providing the agricultural workforce that powered the area’s farms and ranches.

Mining and railroad development, as in much of the West, required outside investors and capital. The mines pumped up the local economy, but their chief beneficiaries were the mine owners and mining stock manipulators. And the booms were inevitably followed by busts or shutdowns, which rattled the local communities. Thus, decisions about the fate of the local mining industry were made by absentee corporations or investors, who paid little attention to the impact those decisions had on the county’s towns and residents.

Regarding major water-related decisions from a political point of view, President Teddy Roosevelt had multiple objectives and saw multiple benefits, to himself as a politician and to his Progressive Movement, when he approved Los Angeles’ plans for the Aqueduct over protests from Inyo County residents. That decision, and the creation of the Inyo National Forest shortly afterward, introduced the Federal Government as a player in the valley and its development, a role which only expanded along with the region’s national forests, parks and public lands.

So, whether it was the City of Los Angeles, absentee mine owners, or the federal government, the citizens of the Owens Valley had little to no say about many of the most important decisions about their land, water or economy.

Ironically, one of those outside forces, the national environmental movement, became the biggest ally of the Owens Valley. Walton details how, starting in the 1970s, state and national environmental laws set the stage for successful legal action by Inyo County, the Mono Lake Committee and other organizations that started to restrain the water-gathering practices of Los Angeles. The ramifications and impacts of those legal tussles and disputes continue to this day.

We work to provide daily news to all of the Eastern Sierra, in the tradition of Eastern Sierra News Service and the Sierra Wave. We bring you daily happenings, local politics, crime, government dealings and fun stuff. Please contact us.
View all posts by News Staff →
Your new friends – Corky and Mason
Mountain Rescue Association comes to Mono