5 years ago this week, the Iraq War officially started with the belief that Saddam Hussein fostered weapons of mass destruction. No evidence was ever found, 4,000 soldiers have died, more than 30,000 wounded. The United States has spent some $500 billion with the ongoing cost of around $9 billion every month. The President insists the war has subdued Al Qaeda. Other elected officials say there is no evidence of that. 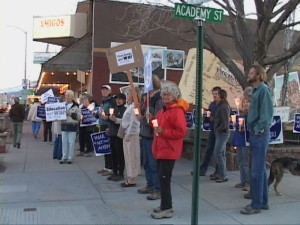 Though many regret opposition to any war that has already claimed lives, more than 60% of Americans oppose the war in surveys. Locally, mothers of military people support the troops above all. Last night, around 30 or 40 people gathered on Bishop's main street to demonstrate against the war. They said they also support the troops and want them to come home. Cars that passed by the gathering honked in support while we were there.

I talked to one of the demonstrator's Paul Fretheim of Independence. He called the Iraq conflict a war crime. Talk of victory and the surge being successful is nonsense. Legally and morally, we should withdraw and pay reparations to the people of Iraq. We need to stop the damage, he said, and bring the troops home.

This issue will remain central to the Presidential election and discussions that take place in advance of the conventions.

We work to provide daily news to all of the Eastern Sierra, in the tradition of Eastern Sierra News Service and the Sierra Wave. We bring you daily happenings, local politics, crime, government dealings and fun stuff. Please contact us.
View all posts by News Staff →
Trees Win a Reprieve
New CEO and Continued Concerns