Mammoth Lakes – Back by popular demand, the one-man play, Vincent, returns to the Edison Theatre for two nights only: January 16th and 17th.  The show sold out both nights when Mammoth Lakes Repertory Theatre presented it in 2014. 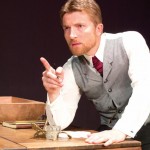 The story takes place a few days after the death of a little known painter named Vincent Van Gogh. Rumors fly around Paris—some say Vincent was a penniless madman, a frequenter of prostitutes, a derelict and soon to be forgotten artist of trifling quality; others denounce him as a wayward priest and a foreigner. There are whispers that he took his own life in a moment of insanity. His brother Theo, Vincent’s confidante and lifelong supporter, is enraged.  He hopes to set the record straight.

Written by Leonard Nimoy, and inspired by Phillip Stevens’ play Van Gogh, the renowned actor, writer, film director, poet, musician and photographer expanded on Stevens’ work.  He drew on a treasure trove of source material—over 500 letters written between Van Gogh and Theo in the 10 years Vincent struggled to master his art. Nimoy appeared in the play when it made its debut, and has passed the baton to actor Jean-Michel Richaud.

“As performed by French-born actor Jean-Michel Richaud, this insightful and often moving 1981 solo show penned by Leonard Nimoy transcends the usual clichés surrounding the high-maintenance artist with the tortured relationship to his aural appendage,” said Philip Brandes of the Los Angeles Times.

Artistic Director of Mammoth Lakes Repertory Theatre, Shira Dubrovner, is thrilled to bring this show back to Mammoth Lakes for a second time due to its popularity.

“The Mammoth Lakes community loved this show last year, and a lot of people requested that I bring it back,” Dubrovner said. “For those who missed it last year, this is your chance to see a spectacular one-man show, perfect for the Edison Theatre.”

Jean-Michel Richaud grew up in Paris and received his MA from Sorbonne University. He also studied at Paris’s National Conservatory for Dramatic Arts and Columbia University’s graduate theater program.  He is a founding member of the award-winning theatre company The Next Arena, which has produced a string of critically acclaimed plays.  Richaud has appeared in numerous films and television shows and is recognized as one of the top European-voice over talents in Los Angeles.

WHERE:         Edison Theatre, 100 College Parkway, across from Cerro Coso College

“…tortured relationship to his aural appendage.”