By News Staff on October 18, 2018 in Government Agencies/Utilities

The Lost Fire, located west of the Reds Meadow Valley in the John Muir Wilderness, is 50 acres and 0% contained. The fire’s growth is predominately to the west. 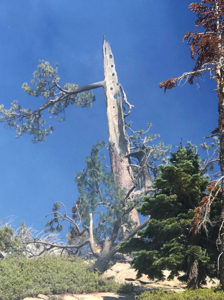 Fire crews are making good progress constructing fireline to contain the fire, although they are working in steep terrain and areas with heavy fuels. Crews have completed fireline along the eastern flank, which remains the area of focus to protect developed areas in the Reds Meadow Valley. Crews are scouting and completing initial containments lines along the other flanks, looking to construct direct fireline along the fire’s edge.

The fire is burning within the perimeter of the 1992 Rainbow Fire, with some of the western growth pushing out of that perimeter. The fire is showing slow to moderate growth and is consuming dead and down fuels. It is burning in brush and mixed conifer forest. The sun-exposed areas within the Rainbow Fire perimeter are allowing the fuels to dry. However, the cold, shorter days are moderating fire activity. 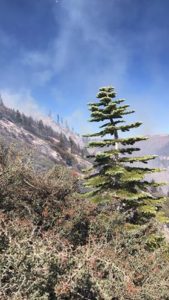 There is currently no threat to life or property. There are no closures at this time, including nearby trails. Smoke is visible from Mammoth Mountain (including from their summit webcam). Smoke may be visible in Mammoth Lakes and June Lake. Smoke is settling into the valleys west of the fire at night. Hikers in the area may also see smoke in the distance from the Dinkey South Prescribed Fire being conducted on the Sierra National Forest.

The Inyo Hotshots, Crane Valley Hotshots, Inyo’s Crew 2, and Helicopter 525 are assigned to the fire, which is a lightning-caused from the storm system that passed through the area on October 2. 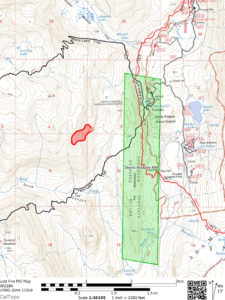