Like most of the country, unemployment is up in the Eastern Sierra.
According to the state Employment Development Department the unemployment rate for Inyo County was 7.3% for the month of October. Mono County checked in with an 8% rate of unemployment for October. 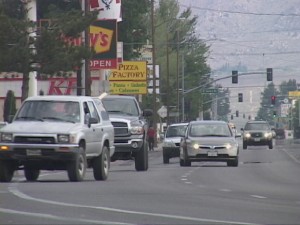 Both counties are running below the state average of 8.2% but far higher then the national average of 6.5% for October.

Much of what Allen sees right now is construction related. With big commercial projects like the proposed Ritz-Carlton project in Mammoth on hold for the foreseeable future, Allen reports that construction workers who could turn down jobs in past years are now hurting.

As small businesses tighten their belts, other employers are cutting back and doing the work themselves, Allen reports.

This century has seen relatively stable unemployment figures for the Eastern Sierra. The previous decade was marked by recession in the early 90s. In 1991, annual Mono County unemployment checked in at 12.1%. Inyo reported a 9.8% unemployment rate that year, before jumping to over 11% for the next two years.

We work to provide daily news to all of the Eastern Sierra, in the tradition of Eastern Sierra News Service and the Sierra Wave. We bring you daily happenings, local politics, crime, government dealings and fun stuff. Please contact us.
View all posts by News Staff →
CHP Arrests two in Mammoth Lakes on Drug Charges
Dangerous Stretch of Hwy 395 Prompts Two Accidents