Northern Inyo Healthcare District (NIHD) employees donated 56 turkeys to three agencies striving to improve the lives of others in Inyo and Mono counties this holiday season. 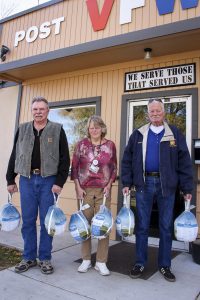 At the Veterans of Foreign Wars Post 8988 where Post Commander Jim Snyder, left, Cheryl Underhill and Post Quartermaster Bob Patterson accepted the turkeys on behalf of those expected at the post’s community dinner. Photo by Barbara Laughon/Northern Inyo Healthcare District

The food pantries for Inyo-Mono Advocates for Community Action (IMACA), The Salvation Army and The Veterans of Foreign Wars Post 8988 each received turkeys on behalf of NIHD employees. 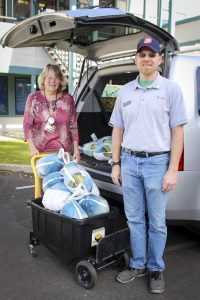 Every year the hospital district gives its employees a holiday turkey to show its appreciation for their hard work. Some of the employees, who either plan to travel or who have other plans for the holiday, donate their turkeys for use at community dinners.

“It does my heart good to see our team giving back to the community that supports us,” said Kevin S. Flanigan, MD MBA, the district’s Chief Executive Officer. 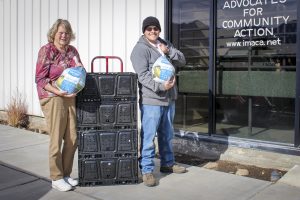 “This gesture touches the lives of so many people — people in need, people who may be alone, people just needing a helping hand during the holidays. To know our team played a small role in making the holiday a little brighter for others is the best gift of the season.”