If you think the only race that happens on Thanksgiving Day is seeing who gets a second helping of pumpkin pie first, guess again. 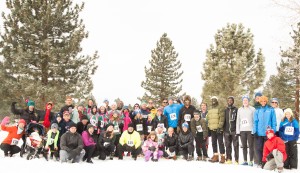 Before lifting a fork, watching football, and taking a post-turkey snooze, hundreds of thousands of Americans started their holiday by giving thanks — with a turkey trot.

And what a great Inaugural Mammoth Lakes Thanksgiving Day turkey trot it was!  With a warm sun and temperatures hovering in the single digits as the race began people of all ages and abilities gathered at Mammoth Creek Park West to celebrate the “day of thanks.” 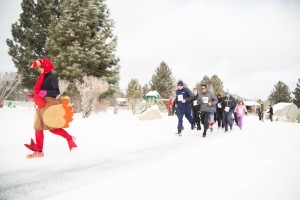 This inaugural turkey trot is one of the country’s most scenic trots right in the heart of the Mammoth Lakes, California with runners that “run the race before you stuff your face.”   This 1.6 mile event benefited the Mammoth Lakes Track Club with 47 “fun runners” including two dogs and a baby carriage starting in the race that morning so they can feel guilt-free about gobbling down later on! 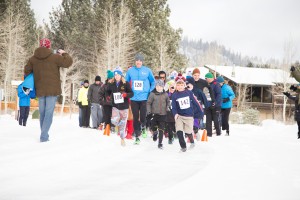 The turkey trot team of competitors were courageous and enthusiastic as Mammoth Track Club Head Coach Andrew Kastor sounded the “cow bell” marking the start of the trot heading east on the town path towards Snowcreek Athletic Club before circling back for a cup of hot cocoa and camaraderie.

Our team of “trotters” celebrated their morning together.