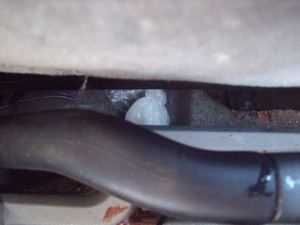 On the morning of Monday, January 20, 2014, at approximately 10:50 am, Mono County Sheriff’s Deputies conducted a traffic stop on a 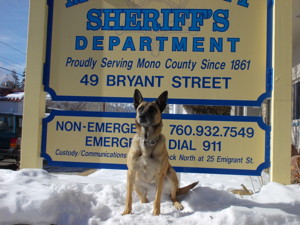 vehicle headed southbound on Hwy 395 at Hwy 203 for no registration stickers on the rear license plate.

Jose Arreola, age 29, of Reno, NV, and passenger Esidro Andrade, age 33, of Sparks, NV, were stopped by deputies on southbound Hwy 395 at Hwy 203 for no registration stickers on the rear license plate. As the vehicle was run for current registration information, Mono County Sheriff’s Dispatch advised deputies that Mr. Arreola had an active arrest warrant out of San Bernardino and Mr. Andrade was a convicted felon out of Nevada for the trafficking of narcotics. Dispatch also advised deputies that neither Mr. Arreola nor Mr. Andrade had a valid driver’s license. When Mr. Arreola was questioned about the current registration on the vehicle, he stated that a friend of his had stolen the current license plate for the vehicle.

Due to Mr. Andrade’s history of narcotics trafficking, deputies requested the narcotic detection K-9 “Tara” to conduct a search of the vehicle.

With several alerts in the vehicle by “Tara”, indicating the presence of narcotics, a physical search of the vehicle was conducted with the discovery and recovery of over fifteen (15) grams of methamphetamine, and a glass pipe with burnt methamphetamine residue inside, sitting between the driver’s  and passenger’s seat. Both Mr. Arreola and Mr. Andrade were placed under arrest and transported to the Mono County Jail in Bridgeport without incident.

All charges for Mr. Arreola and Mr. Andrade are pending with the Mono County District Attorney’s Office.

Tara is legendary; someone with all her bio should get her a Wikipedia listing.
http://en.wikipedia.org/wiki/Tara_%28name%29
No Joke…
If you cant do it, yet have her DOB, training, pedigree, etc. post the info here and I’ll give it a plug.
Mongo

Bennet, do you have a picture of Tara to publish?

DT, Sheriff’s Office provided photo of Tara which is now posted on this story.
BK

Tara looks great. She can check out my car anytime (as long as my dog agrees).

Isn’t Tara like, a dog? Seems like the bio might be a bit short: Tara was born of two dogs, and was trained to sniff drugs for food. She is good at it. She sniffs where directed by humans.

Most dogs are more interesting than most people.

Whats up with the tilt top head in all these MUG shots?
Head held back = arrogance/ defiance?
Head held forward = humility/ regret/ sorrow?
Is someone at the cop shop coaching them?

Tinner
Reply to  Mongo The Idiot

At first I thought Esidro Andrade was falling asleep during this mug shot or maybe that’s his tough guy look or maybe it is defiance like you say Mongo or maybe he’s hiding his 2nd chin. Either way, stupid stupid stupid…not guilty but stupid.
Good girl Tara girl, good girl!!!!!

Looks like these guys are going to learn the hard way. Glad they didn’t have that crap around in my days!

Trouble, your day must have been before the forties, or you just didn’t notice what was in people’s medicine cabinet or song lyrics.

When I was a kid, there was no crack cocaine, no methamphetamine…
Until you cleaned your plate!!!

Maybe your right Pedro. I’m glad it never came my way. P.S. I was a product of the Vietnam generation.

Nice! If anything, Go after Meth! That stuff is so nasty it makes users look like the walking dead, along with the erratic behavior, but the fact still remains, if Law Enforcement has trouble keeping METH out of the little town of Lone Pine CA, I have very little confidence… Read more »

JeJo…..what are you ranting about? First you say “Nice!”, then you go on ranting about lack of change, and meth in Lone Pine. We all know LP is a cesspool of users….if you REALLY want to “combat” meth and its use, why don’t you assist INET ?

Why don’t I assist INET? Because I am not the type to hang my own out to dry, when I already know the way the criminal justice system handles those struggling with drugs is very much counter productive for society. Believe me I thought about it, but I would rather… Read more »

Jeremiah…..Thing is,in Lone Pine,we all know who it is…..where it is….but with the way the court system works it,seems Law Enforcement kind of has it’s hands tied…arrest…..release….arrest…release….probation….arrest….release….parole…..arrest….release…..and so on and so on.Thing is,with meth,we ALL suffer….judging from the recent thefts and burglaries of homes and properties.

What burglaries Wayne?
Why don’t we hear about this on SW Media?
Do they not get reported????
Mongo

The problem is that methamphetamine addiction is not a law enforcement issue, it’s a medical issue. The burglaries are a result of the prohibition. Treatment and ongoing support are the solution.

Michael…So your saying those hooked on meth shouldn’t be held accountable for what they have to do in order to feed their addiction ?..Have you ever lived in a big city with a meth problem?…or with your reference to prohibition, are you trying to say meth should be legalized ?

No registration stickers on a stolen license plate, no drivers license and a warrant for your arrest. Not the sharpest tools in the shed.