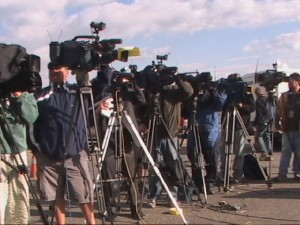 After the invasion of media from around the world, Mammoth Lakes returned to normal as many still wonder what really happened to aviator Steve Fossett. Why did he crash in the mountains above Mammoth Lakes? At least one man closely involved with the discovery thinks Fossett may have survived the crash, if briefly.

Tom Cage, owner of Kittredge Sports, helped his employee, Preston Morrow handle the discovery of Fossett's ID and then plane wreckage, plus the wave of media calls.

He called it the "onslaught of the media." Cage said that last week was "unbelievable with how many cameras, satellite trucks and reporters had come to Mammoth to cover the discovery Preston Morrow made of Mr. Fossett."

So, what about the mystery of Fossett's crash? Cage said that he attended some of the National Transportation Safety Board press conferences. He said his only thought was that considering how the NTSB described the plane's impact that there might be a chance Fossett survived the crash. "It didn't nose in. It had a slow stall speed. He was a phenomenal pilot. He was an experienced adventurer. The guy was tough. That doesn't change the ultimate outcome or the fact that it was real unfortunate. It will be interesting to see what NTSB has to say when they're done with their review of the wreckaqe and all the pieces. 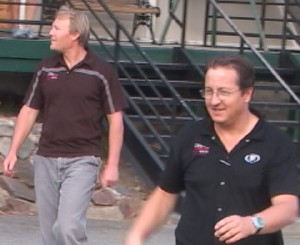 Terry Wiliams of the NTSB told us today that all of the plane wreckage was transported to a storage facility in Sacramento. One person is in the process of examining the wreckage, weather at the time of the crash and bone fragment findings.

Madera County confirmed that the Coroner there continues to analyze four bone fragments found in the vicinity of the crash site.

Mono Sheriff Rick Scholl issued a thank you to nearly 30 agencies that helped in the search effort.

As for Preston Morrow, the man who found the key piece of evidence that prompted the search, he took a couple of days off and went back to work this week. Tom cage said contrary to some reports, Morrow didn't do what he did for a reward or any money. Morrow, Cage and others involved said they just hope for closure for the Fossett family. Cage added that Sir Richard Branson, a close friend of Fossett's, had personally called Morrow to thank him for his discovery.

We work to provide daily news to all of the Eastern Sierra, in the tradition of Eastern Sierra News Service and the Sierra Wave. We bring you daily happenings, local politics, crime, government dealings and fun stuff. Please contact us.
View all posts by News Staff →
Pollen Test Inconclusive in Unsolved Mammoth Murder
Bureaucrat Beat: Spin Doctors, Rich Theives, What Maverick?