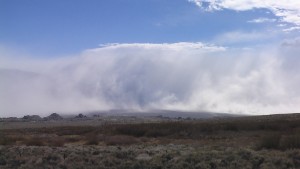 LADWP’s dream to dig big rows of dirt to keep dust down on the Owens Dry Lake is dead. They called it Moat and Row, but the State Lands Commission voted unanimously Tuesday to deny DWP a lease on the lake bed to perform Moat and Row for dust abatement.

State Lands, which owns the bottom of the Owens Dry Lake, has the say-so over what DWP does there. LA wants to quit using water to keep down the toxic dust, so officials came up with Moat and Row. State Lands Commission staff spoke at yesterday’s meeting to recommend denial of a 3.5 square mile lease to DWP. They argued that Moat and Row has major visual problems and impedes wildlife mobility.

Marty Adams who heads DWP’s Water Division spoke briefly about the need to move ahead with the Moat and Row method. State Lands staff argued for something more creative.

The State Lands Commission voted unanimously to deny DWP’s proposal. Air Pollution Control District Director Ted Schade said that now DWP will have to come up with Plan B. Schade said, “I’m disappointed that DWP put all their eggs in one tenuous basket.”

DWP General Manager David Freeman and State Lands Director Paul Thayer had both appeared at last month’s Air Pollution Control Board meeting in Mammoth. Freeman more or less begged for more time to clean up 3.5 square miles on the Dry Lake bed. The deadline is currently October of this year. Since DWP can not do Moat and Row, they will likely fail to reach that fall deadline. At the March APCD meeting, it was clear that DWP could face a $10,000 per day fine for failure to clean up the dust. The City had already been granted an earlier time extension.

Schade said he hopes DWP will come to the District “with something effective.”

We work to provide daily news to all of the Eastern Sierra, in the tradition of Eastern Sierra News Service and the Sierra Wave. We bring you daily happenings, local politics, crime, government dealings and fun stuff. Please contact us.
View all posts by News Staff →
Spending Draws Questions at Eastern Sierra Unified School District
New Officials on the Way at Mammoth School District