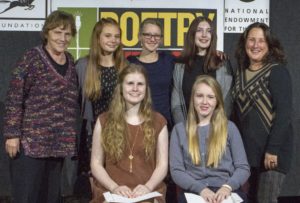 This year’s winner, Sophia McKee of Lee Vining High School, recited I heard a Fly buzz – when I died by Emily Dickinson and I Go Back to May 1937 by Sharon Olds. Sophia has won POETRY OUT LOUD at the regional level for the past three years, and has the opportunity to compete at the state finals in Sacramento. The second-place winner, Storme Donahue of Coleville High School, performed Silence by Thomas Hood and What horror to awake at night by Lorine Niedecker. As the second-place winner, Storme will advance to Sacramento if Sophia is unable to make the trip.

Other competitors this year were Ellery McQuilkin and Ana Wanner of Lee Vining, and Colette Zimmerman-Klapstein of Colleville. The competition has a pyramid structure, with winners from each school advancing to the county competition in Mammoth. On Sunday, a panel of five judges scored each student’s performance based on physical presence, voice and articulation, dramatic appropriateness, evidence of understanding, and overall performance, while an accuracy judge evaluated their delivery word-by-word for errors.

The judges were Juliana Olinka-Jones, Eva Poole Gilson, Noelle Deinken, Luan Mendel, and Tim Gorman, with Trevor Van Winkle as accuracy judge. The winner from Mono County will travel to the state competition in Sacramento, with the second round of the competition held in the state senate building. The winner at the state level will then advance to the national finals in Washington D.C.

Students who compete are required to memorize and recite two poems for the county competition, selecting one poem written before the 20th Century and one that is 25 lines or fewer, or fulfilling both criteria with one poem. Winners then memorize a third poem for the state competition. All poems must be selected from the official anthology published by POETRY OUT LOUD every year. The competition is now in its ninth year in Mono County.