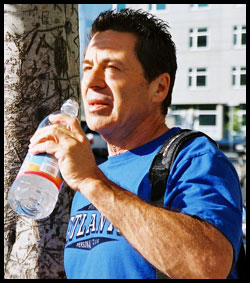 Kohler was last seen at a campfire at the Mesquite Springs camp ground at approximately 8:00 PM on Monday March 12th.  According to interviews conducted with the bicycle group, Kohler departed from the campfire after saying he was tired.  In the morning when Kohler did not meet up with the rest of the group, his tent was opened up; but there was no sign of Kohler or any indication that he slept in his tent.

Kohler was last seen wearing a blue jacket, navy blue t-shirt, and black pants; he is 5’ 7” and approximately 160 pounds, he has brown hair and brown eyes.  Kohler did not have his bicycle or any overnight gear with him.  Anyone who was on the Scotty’s Castle Road that may have seen Kohler or given him a ride is asked to contact the Inyo County Sheriff’s Office immediately at 760-878-0383.