More on bears in Mammoth who have moved out of hibernation. Wildlife specialist Steve Searles said the bears are puzzled 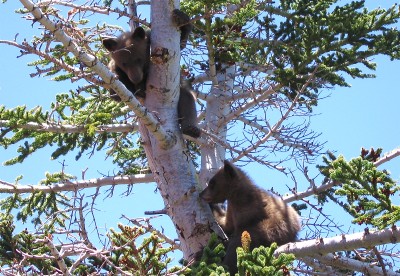 with so much snow on the ground, making it hard for them to find food.

Two bears have already gone inside residential garages. That kind of invasion signals a strong need to think about proper trash storage and a proactive effort to keep human food away from wildlife.

You can see more of Mammoth’s bears on the second of three new episodes of Bear Whisperer on the Animal Planet. The original Bear Whisperer, which features Steve Searles, the bears, the Town of Mammoth and police, premiered last year to very high ratings. Animal Planet ordered three new episodes. Searles and LMNO Production Company film crews spent many days and nights documenting the bear stories.

The second episode focuses on bear cubs. That show will air on the Animal Planet Thursday April 14 at 10pm. Mammoth Town Councilman John Eastman pointed to the positive presentation of the community. He called it “excellent publicity.” Others have pointed to the television time and exposure for Mammoth as advertising that the Town could never afford.

We work to provide daily news to all of the Eastern Sierra, in the tradition of Eastern Sierra News Service and the Sierra Wave. We bring you daily happenings, local politics, crime, government dealings and fun stuff. Please contact us.
View all posts by News Staff →
Cats and dogs: Grace and Sienna
Mammoth high school recognized by state