By News Staff on August 3, 2014 in Government Agencies/Utilities 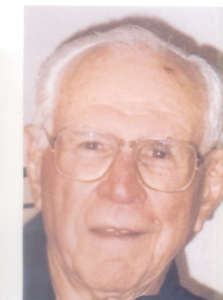 PAUL MONROE PRICE, 97, a resident of Bishop for the last 69 years passed away peacefully July 26, 2014. Paul was born September 13, 1916 in Grand Junction, Colorado, to Arno and Sarah Price.

Paul was employed by Union Carbide for 42 years and was superintendent of the Transportation Division for 25 of those years.  Paul was a charter member of the Pine Creek Lions Club.  He was active in Pine Creek community services, Boy Scouts and the PTA.  He was a member of the Northern Inyo Hospital board  for 24 years.

He was a Life Member of the Mt. Whitney Chapter, OES, and served as Patron 10 different times.  He also served as Grand Representative of New York to California, and Grand Chaplain of the State of California, Grand Chapter, 1994.  He was Rainbow Dad and DeMolay Advisor for two youth groups.

In accordance with his wishes donations may be made to a favorite charity of ones’ choice.

Funeral services will be private.

Rest in peace Mr. Price.
I didn’t know you but it sounds like you had a good run.