By News Staff on September 18, 2014 in Government Agencies/Utilities

At approximately 3:20PM yesterday afternoon during routine patrol, a traffic stop was initiated by an Inyo County Sheriff’s 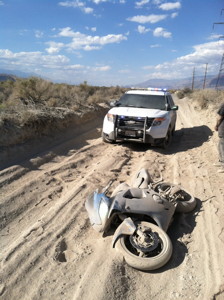 Deputy on the corner of Mt. Whitney and Mt. View in Lone Pine for a Honda street bike with an obstructed/unreadable license plate.  While the Deputy was exiting his vehicle to contact the driver, the driver put the motorcycle in gear and headed southbound on Mt. Whitney at a very high rate of speed.

The driver was uninjured and attempted to flee on foot.  After a brief foot pursuit the Sheriff’s Deputy arrested the suspect without further incident.  The suspect was identified as Joshua Evans, a 28 year old man from Lone Pine, CA. Evans is being held at the Inyo County Jail for reckless driving, felony evading, and driving without a motorcycle license.  Bail has been set at $20,000.

We work to provide daily news to all of the Eastern Sierra, in the tradition of Eastern Sierra News Service and the Sierra Wave. We bring you daily happenings, local politics, crime, government dealings and fun stuff. Please contact us.
View all posts by News Staff →
Hallenbeck promoted
Vehicle theft arrest
1 Comment
Newest
Oldest Most Voted
Inline Feedbacks
View all comments

Life would be pretty boring for the Inyo deputies if it weren’t for boneheads like this guy & his buddy at Coso Junction.