Tuesday was National Teacher Day, and when I showed up to the ESUSD Board meeting that evening, I overheard a few 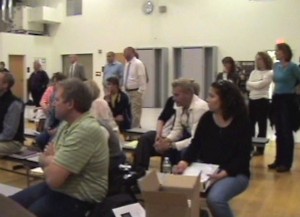 students talking on the elementary school playground. Are you ready to see our school die? One asked.

Hours later, I was in the gymnasium, surrounded by banners proclaiming Milk-it does a body good, and found myself looking around the standing-room-only gym at teachers, students, parents of current and eventual ESUSD students, spouses of teachers, and concerned community members. The sight made my stomach turn–unfortunately, its a feeling that has become somewhat familiar.

I felt sick because I realized, once again, that despite my interest in seeing the story reported in local media, I couldnt possibly do it. First, I know and respect too many people who are being directly affected by itstudents, teachers, and administrators, and I am too infuriated for objectivity. Secondly, I have not made the time to delve deep enough into the ESUSD budget to truly understand the issues. Third, I recognize that ESUSD communities are divided by several mountainous passes that, sadly and apparently, have equally mountainous differences of opinion.

As Board members acknowledged last night, to render a win-win situation from this fiasco is impossible, and because I agreed, I felt sick.

All I found myself wanting to do was write mean and unsubstantiated things about people who I have barely met, who I personally blame for this mess. I wanted to do this for one reason: because I felt helpless. I felt as though no matter what effort I put forth, or anyone else put forth, we were made aware of the speeding train too late, and now, it would not be stopped.

I kept my skepticism to myself when community budget groups were formed. Even though there were (emphatically denied) rumors that the ideas emerging from the workshops would not gain traction, I hoped they would. At the least, I expected they would illustrate to the Board, and interested citizens that there IS a different approach, and that there is never just ONE solution. I expected that upon seeing some outside perspective, the Board might actually consider actively directing their staff, instead of blindly taking direction from them.

But alas, the ideas did not gain traction. The Board appeared to listen intently last week when those scenarios were presented, but less than a week later, Resolution 10-10the death knell for the Eastern Sierra Academy and the High Desert Academywas rung.

The community budget scenarios were the result of 100s of cumulative hours of effort by dedicated and concerned local citizens. This effort was actually at the behest of the Board, who formed these groups to help come up with some alternate ideas, but in the end they were disregarded because they did not fully contemplate the countless intricacies of education finance, as if laypeople could be expected to do so in a few short weeks.

They produced a first draft, but before District staff could analyze and re-direct their input, time had run out. It was not that the ideas did not gain traction, it was that they were not given enough time to. Citizens pleaded to the Board for another week, which would still meet the drop-dead date for legal action on the layoffs, but it fell on 3 out of 5 deaf ears.

These citizens boldly grappled with a monumental task, and for that they should be commended and rewarded. To have their efforts summarily dismissed by Resolution 10-10 is a sickening insult to them, and those who believed in their premiseto keep the cuts as far away from the kids as possible.

The most troubling aspect to all this is the lack of accountability. None. Not for the financial mismanagement that led to this, or the public relations disaster that has followed. The only individual who deserves any credit for even acknowledging the void is Board member Doug Northington, who last night aptly called the situation a train wreck, and suggested he should have been asking some tough questions about finance a while back.

All the other Board members have acted as though they have played no part in this, and sadly, I expect they fully believe it. They apparently do not believe it is their responsibility to devote the time necessary to understand complex financial statements, or to ponder the future reliability of their revenue sources. They apparently do not understand when they are advancing absurd contracts, or when said contracts should be renegotiated.

Above all, the ESUSD Board has apparently forgotten the single most important part of being an elected official: to direct their staff. This District, quite frankly, is running in reverse.

The fact that this Special Meeting where 10 teachers would be laid off was scheduled on National Teacher Day illustrates with excruciating clarity the lack of foresight that caused, and exacerbated this debacle. Who was responsible for that? At this point, my stomach tells me I will never find out.

The New Busy think 9 to 5 is a cute idea. Combine multiple calendars with Hotmail. Get busy.

We work to provide daily news to all of the Eastern Sierra, in the tradition of Eastern Sierra News Service and the Sierra Wave. We bring you daily happenings, local politics, crime, government dealings and fun stuff. Please contact us.
View all posts by News Staff →
Layoffs Point To Closed Schools
Elementary Schools in Bishop Now Producing Solar Power