By News Staff on December 22, 2011 in Government Agencies/Utilities 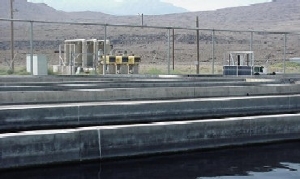 Before 1970, Fish Springs and Black Rock hatcheries were fully supplied with water via springs.

Most of the Department of Water and Power groundwater pumping in Inyo County goes to the two fish hatcheries and then ends up in the Los Angeles Aqueduct. The Owens Valley Committee sued Fish and Game for failure to examine pumping impacts related to the operation of its hatcheries.  Now, the two sides have reached a settlement which would limit pumping at Black Rock Hatchery and look for ways to improve the groundwater tables around Fish Springs Hatchery.

The Owens Valley Committee challenged Fish and Game’s 2010 Environmental Impact Report for its statewide hatcheries.  The OVC points to the fact that pumps have dried up springs that used to serve the hatcheries and that the water ends up in the aqueduct.

The lawsuit settlement agreement calls for Fish and Game to identify a pumping limit of 8,000 acre feet per year at Black Rock.  There will be no reduction in fish.  DWP, which leases the hatchery and provides water to Fish and Game, will have to agree.

As for the Fish Springs Hatchery, President of the OVC, Mark Bagley, said both sides will determine damage done in the Big Pine well field near the hatchery and determine if water leaving the hatchery could go into the well field to improve conditions. While this work goes on, OVC will not seek to restrict the pumping of 25,000 acre feet per year for Fish Springs.

We work to provide daily news to all of the Eastern Sierra, in the tradition of Eastern Sierra News Service and the Sierra Wave. We bring you daily happenings, local politics, crime, government dealings and fun stuff. Please contact us.
View all posts by News Staff →
MLPD: new sergeant
Dennis Mattinson’s weather forecast