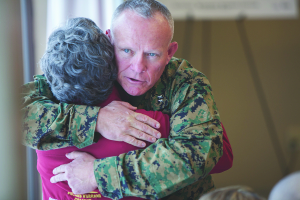 Each year since 2007, Disabled Sports Eastern Sierra (DSES) proudly hosts our nation’s Wounded Warriors. The Warriors received personalized instruction in Alpine skiing, snowboarding, cross-country, biathlon demonstrations – even tubing at Woolly’s Tube Park! In addition, the Warriors were treated to an exclusive screening of the documentary “The Movement,” narrated by Warren Miller and Robert Redford. They also were given a sneak peek at DSES’s newest project, the first ever National Wounded Warrior Lodge, a housing and education program, right here in Mammoth Lakes.

DSES’s program, which has been vetted and approved by Wounded Warriors Battalion West, pulls in its share of brass, as well. This year’s special guests included 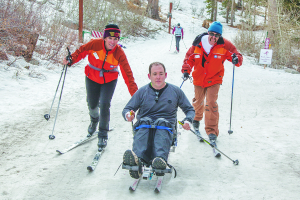 This year’s Warriors were effusive in their praise for the week, even those who were skeptical of winter sports. Ryan Sykes, who has a traumatic brain injury (TBI), said he’s mostly “a summer guy,” but called his first exposure to winter sports “fun … I want to keep going.”

Jorge Salazar, a double leg amputee, remarked, “I can count on one hand the number of times I touched snow, but this whole week was totally legit.” He continued, “Zachary [Ergish, DSES Staff Instructor] was amazing. He helped me get it. The first day, I was on, the second day I was a little stiff and not so good, but on day three I tore it up. Being on snow is different; it definitely makes your brain work harder.” What did he think of the Wounded Warrior week? “Amazing. From the dinners to the staff, it’s one of the top programs I’ve ever seen.”

Perhaps the most philosophical assessment came from Theophilus Tor, who has Post-Traumatic Stress Disorder (PTSD). “It was surreal, “Tor said of his snow experience. “I didn’t have to think about anything else. It’s been a while since I’ve been in a sport where you’re 100 percent in the moment. There was a great peace to it.” One fringe benefit to attending the weekend, Tor added, was making new “family, not just new friends. “I don’t know what I did to deserve this, but it was just awesome.”

Even though they logged lots of long hours, DSES Volunteers were also caught up in the fervor. “‘It was fantastic. So much is happening, but I wish it lasted two weeks or we could do it more often,” commented new volunteer Patricia Martin, who participated in her first Wounded Warriors event. The week also meant a lot to DSES Volunteer Alan Yata, who is both a veteran of several Wounded Warrior events and the U.S. Coast Guard. “I served during the Vietnam era, and I saw protesting, fighting,” he recalled.

“Time has changed how we approach our freedom and what our military provides for us.”

Yata notes that the public nowadays tends to think of Wounded Warriors as being from recent conflicts in Iraq or Afghanistan. DSES’s event is open to all Warriors, welcoming veterans from Korea and Vietnam as well. “Finally society is starting to see things differently,” Yata said. “During Vietnam, we didn’t thank them. We ignored them. We didn’t have Wounded Warriors in Korea or Vietnam. What we now know as PTSD was called ‘shell shock’ and things like that. We now have new treatments and approaches to PTSD and other wounds.

Executive Director Kathy Copeland summarized the program’s overarching goal. “We’re here for one reason: to honor the service and sacrifice of these men and women and their families and to, hopefully, in a very small way, contribute to the advancement of their recovery by teaching them skills in skiing or snowboarding, while showing them a great time here at Mammoth!”