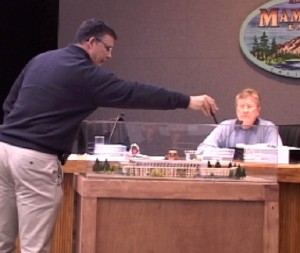 With a project of this size there were bound to be community concerns, such as traffic, water use, sewer use, density, height, and others like the much vaunted PAOT or people at one time, but the Old Mammoth Place project was also the first major project to be run through the relatively new Town of Mammoth Lakes Community Benefits and Incentive Zoning policy. This policy grants the developer up to double density without having to pay developer fees on the additional units.

In the history of the project, written up by Planning Commissioner Elizabeth Tenney, she points to the long odyssey that the project has come through. Since the project was first proposed in December of 2005, the town has adopted and worked to implement a new general plan and other related policies. There have also been design changes and a change in ownership.

The project was finally approved on Thursday by a vote of 4-1. Commissioner Sharon Clark was the lone dissenter.

We work to provide daily news to all of the Eastern Sierra, in the tradition of Eastern Sierra News Service and the Sierra Wave. We bring you daily happenings, local politics, crime, government dealings and fun stuff. Please contact us.
View all posts by News Staff →
Bureaucrat Beat: Hollywood News, Warp Speed, Safety Net
Mammoth Dog Teams Look To Supervisors For Relief