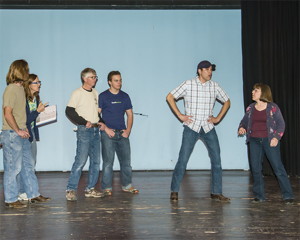 Grab your cowboy hats and boots, the Rogers and Hammerstein blockbuster musical Oklahoma! stampedes into the historic Bishop Union High School Theater this March with cowboys, cowgirls and farmers kicking up a song and dance storm. The local cast, led by real-life couple Jenn and Eddie Davis as Laurey and Curly, kicked off rehearsal right after New Years for the Playhouse 395 spring show.

Veteran Director Martha Reynolds holds the reins assisted by Karen Keene, while Diana and Chris Lanane direct the vocals, and Bishop Community Band Conductor Mark Hatter leads the live orchestra. Key cast members feature Patti Cook as hilarious Ado Annie, Ron Valenzuela as likable and gullible Will Parker, Chet Baker as creepy Jud Fry, Susan Kunze as the stalwart Aunt Eller, and newcomer Cristian Herrera as the shifty but fun peddler Ali Hakim. Memorable Oklahoma! songs such as “Oh What a Beautiful Morning,” “I Cain’t Say No” (also the show motto) “Poor Jud is Dead” and of course “Oklahoma!” bring the settling of the west to life and will leave you humming for days.

Behind the scenes dozens of volunteers are building and painting amazing sets; hand-creating western costumes; and gathering ranching props, all with the goal of transporting theater-goers to the Oklahoma Territory of the early 1900’s. Over the last three weekends in March only, theater fans will have the opportunity to see some fine rope twirlin’, barn dancin’, and even the “Surrey with the fringe on the top.”

And you’ll want to be sure to get out your best western-wear out and join the fun because a prize will be given out at each show for the best-dressed cowgirl and cowboy. Tickets go on sale February 1, and show dates are March 7-9, 14-16 and 21-22. In response to numerous requests, for the first time ever Playhouse 395 will offer Sunday Matinees, on March 9 and 16. You can buy tickets and get more information at www.Playhouse395.com or 760-920-9100, or stop by the box-office in the Inyo Council for the Arts building at 136 South Main Street on Monday-Wednesday-Friday from 3:30-5:30.

We work to provide daily news to all of the Eastern Sierra, in the tradition of Eastern Sierra News Service and the Sierra Wave. We bring you daily happenings, local politics, crime, government dealings and fun stuff. Please contact us.
View all posts by News Staff →
Drama fills in for snow
Plea in Hogback marijuana grow case