The Board of Directors at the Eastern Sierra Tri-County Fair met recently and got the ball rolling for the 2015 edition of their flagship event, the Tri-County Fair. The winning slogan was submitted by Joshua Hinson and is “The Tri-County Fair, where Culture and Heritage come together.” Fair CEO Sally Symons commented, “There were over 50 entries this year, and it was a tough decision. Once again our community showed great support for this wonderful tradition.” 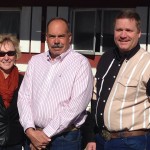 Other decisions about the annual end of summer celebration include the Pie Contest Flavor, which will be Pecan. And, for 2015 the Party Barn will become the “Fiesta Barn” with a Carne Asada BBQ contest, On The Spot Salsa contest (done “Chopped” style) and tortilla and fry bread contests. “With any luck we’ll have some margaritas, beer and live music too,” commented Symons.

Fair supporters and participants should look forward to other new contests and classes when the Exhibitors Handbook comes out in April. “We are hoping to change a few things up a bit and involve even more members of our three counties in the fun of entering exhibits at the Fair,” said Symons. “I’m confident that there is a lot of untapped creativity and talent out there that we would love to give a platform to at the fair while honoring our cultures and heritage this year.”