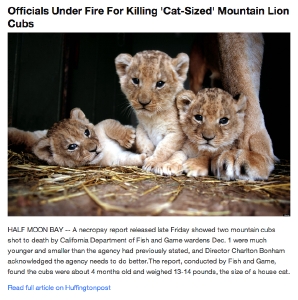 State Senator Jerry Hill came up with a bill on the heels of a controversial story in Half Moon Bay in his district where Fish and Wildlife wardens shot and killed two baby Mountain Lions who had wandered into a populated area. According to media there, a public outcry arose when an examination of the two cubs revealed that they were much younger and smaller than the wardens claimed.

Reports said the baby animals were four months old, weighed 13 or 14 pounds and were starving. Wildlife protection groups said the baby cats should’ve been tranquilized and rescued. Senator Hill’s plan would reportedly require game wardens to use non-lethal methods unless there is a dire threat to public safety. It would also allow state Fish and Wildlife officials to work with wildlife groups to capture the animals.

In response to the Half Moon Bay lion shootings, Fish and Wildlife Director Charlton Bonham is quoted in the Huffington Post as saying, “Prior to the incident at Half Moon Bay, I directed the department’s leadership team to evaluate our guidelines on how we respond to interactions with mountain lions and bears and determine how we can do better.”

That statement apparently applies to management of bears in the Eastern Sierra. One incident in particular in Mammoth Lakes upset residents and bear managers. Fish and Game had refused to rescue two bear cubs who were still suckling their mother when she was killed in a traffic accident. Over a period of days, Wildlife Specialist Steve Searles and a Mammoth Police Officer strongly maintained that the cubs would die if not rescued. The Tahoe Bear Rescue organization had agreed to take the baby animals. Fish and Game staunchly refused.

We will check with Fish and Wildlife about changes in policy based on the Director’s statement.

I’m down.
How do we find insure all DFG employees have common sense, a heart and the ability to listen to somebody who knows what the hell they are talking about?

I’m shocked–shocked to find out that DFG Wardens lie!!