By News Staff on May 8, 2013 in Entertainment/Local Events/Activities, General Misc. Stories, Government Agencies/Utilities

The Eastern California Museum will unveil its new photo exhibit, “Building Bill’s Ditch,  The Los Angeles Aqueduct, 1913-2013,” on Saturday May 11, starting at 10 a.m. 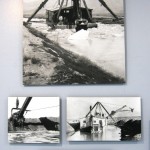 The exhibit provides a glimpse into five years it took to design and build the 233-mile long Los Angeles Aqueduct. Besides about 100 photos, many of which have rarely been seen in public, the exhibit also features documents and artifacts from the Museum’s collection and from Owens Valley residents.

From a photo of the first crew of workers and wagons coming to the Owens River at what could be the LA Aqueduct Intake in 1908 to the roaring crowds that greeted the rush of water into Los Angeles in 1913, the exhibit explores the many aspects of the construction of the Los Angeles Aqueduct, which workers called “Bill’s Ditch,” in reference to William Mulholland, the chief engineer for the LA Department of Water. That “ditch” has been delivering water from the Eastern Sierra to the city of Los Angeles for the past 100 years, and continues to perform its intended function in this, its centennial year. 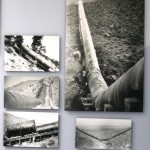 A segment of the exhibit highlights the Occupation of the Alabama Gates in 1924, which was the high water mark, so to speak, of the Owens Valley Water Wars. A short summary of the impact of the Second LA Aqueduct and the current, ongoing legal and environmental issues surrounding the Aqueduct, the Eastern Sierra and the City of Los Angeles is also included.

By changing the course of the Owens River, the LA Aqueduct changed the course the history of Los Angeles and the Eastern Sierra. “Building Bill’s Ditch,” however, narrows more than a century of history into a detailed look at the actual construction of the Aqueduct.

Thus, the exhibit is devoted to the massive engineering, logistical, and construction feats needed to build the Aqueduct. The exhibit’s depiction of the laborers and workers who toiled in Sierra snow and desert heat put a bit of a human face on the massive project.

The exhibit is divided into sections. First is the Aqueduct Intake, which diverts the flow of the Owens River into the man-made channel. Digging that channel took several types of floating, suction or “dipper” dredges. Those impressive machines worked while floating in the channel from the Intake at Aberdeen to the Alabama Gates to create the “unlined” portion of the Aqueduct.

Starting at the Gates, “the ditch” had to be scooped out of the rocky soil with a variety of large, electric-powered shovels and excavators. A section of the exhibit looks at the two hydroelectric power plants in the Owens Valley, Division Creek and Cottonwood, which supplied the electricity for the construction effort.

Starting at the Gates, the channel was lined with concrete until it reached Haiwee Reservoir, which was constructed at the same time as the Aqueduct. A series of photos shows the steps it took to dig out the channel, set concrete forms, then pour and finish the concrete on the walls and the bottom of the Aqueduct channel.

Entering the desert, the Aqueduct went underground in either concrete “conduits” or steel pipes, some large enough to drive an automobile through, and a series of tunnels. The most dramatic sections of the Aqueduct are the imposing siphons, made up of steel pipe crawling up hills and dropping down the other side. The Jawbone Siphon is the largest and most well-known.

Getting all the men and material the sprawling construction site was a feat in itself, and one accomplished with a combination of mules, wagons, trains and just plain muscle.

The muscle was provided by the thousands of men who toiled on the project. Many of them lived in construction camps that stretched from Manzanar to Southern California. A large selection of photos depicts life in the camps and how the aqueduct workers also found time to enjoy the high Sierra by hunting and fishing, for example.

Also on display are sets of technical drawings detailing the specifications for the different sizes of channels, the siphons, Haiwee Reservoir, typical hydro plants, and two large graphs that show the river flows of both the Owens River and the Los Angeles River in the early 1900s.

The public is invited to explore the exhibit starting at 10 a.m. The Museum will be open until at least 6 p.m. on Saturday, May 11, in conjunction with the Friends of the Eastern California Museum annual Barbeque, which starts at 4 p.m. The museum is located at 155 N. Grant St., three blocks west of the Historic Courthouse in Independence. For more information, call 760-878-0258.

Super interesting, cant wait to visit, but I still think LADWP is an Evil Empire ran by a bunch of back stabbing go back on their word make a dollar off their own mother greed mongers.