Morgan Wade Kinney Sr. was born in Bishop, California on May 4, 1959 to Harold Kinney Sr. and Beverly Yandell Kinney.  Morgan grew up and attended school in Bishop, CA.  He worked as a laborer until he suffered a debilitating back injury. 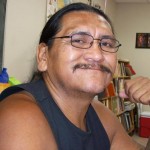 Morgan and Juanita were married on September 1, 1989.  They spent 22 happy years together as husband and wife before Juanita passed away in 2011.  Juanita was proud to be Morgan’s wife.  She even had a sweatshirt made that said, “Property of Morgan Kinney”.

Morgan loved Juanita very much – they were inseparable.  Morgan and Juanita did so much together in the 22 years they were married.  They traveled to numerous places as often as they could, went exploring mines and petroglyphs, worked on their home and garden, raised grandchildren, went wooding, and enjoyed family birthdays, BBQs, and dinners.  They were happy together and loved exploring the outdoors.  Sometimes they would just get in their car and go nowhere in particular.  They loved buying lunch makings and going for day rides.

Morgan was even happy to tag along when his wife went clothes shopping which was often.

Morgan loved spending time with his grandkids, nieces, and nephews.  One of his favorite pastimes was fishing.  He loved catching “pugwee” and often took his grandkids, nieces, or nephews, fishing in all the creeks and secret spots until his disabilities caught up to him.  When asked what he wanted for his birthday or Christmas it was always fishing lures or something related to fishing.

After Juanita passed away in 2011, Morgan longed to go home and be reunited with her.  Morgan Wade Kinney Sr. passed away after a lengthy illness on November 20, 2014 at the age of 55.

Burial services will be private per Morgan’s wishes.  Interment will be Sunland Indian Cemetery.

We work to provide daily news to all of the Eastern Sierra, in the tradition of Eastern Sierra News Service and the Sierra Wave. We bring you daily happenings, local politics, crime, government dealings and fun stuff. Please contact us.
View all posts by News Staff →
Lone Pine man arrested on attempted murder charge
Matthew Hanson remembered for ‘special zest’