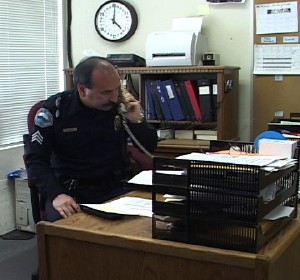 Sources in various parts of the Eastern Sierra told KSRW that Lt. Short has been in talks to work out his retirement. We have placed several calls to the Lieutenant, but he has not returned those calls.

When asked if his Lieutenant would retire, Mammoth Police Chief Randy Schienle said, “I don’t have any idea about that. If Jim is in negotiations, talk to him.”

Asked about this issue, Councilmember Jo Bacon said, “I can not comment on that. It’s a personnel matter and,” she said, “there had been discussions in closed session that related to it (Lt. Short’s retirement).” Bacon said we would have to talk to Town Staff.

If, in fact, Mammoth’s Lieutenant will retire, a whole new leadership will take shape in the Department. Chief Schienle had confirmed his own retirement was under negotiation, and a week later the Chief issued a formal announcement that he would retire effective August 11th.

Chief Schienle had said a recruitment firm would find an interim chief by July 1st. The possibility of the second in command also leaving means further change in the Mammoth Lakes Police Department.

We work to provide daily news to all of the Eastern Sierra, in the tradition of Eastern Sierra News Service and the Sierra Wave. We bring you daily happenings, local politics, crime, government dealings and fun stuff. Please contact us.
View all posts by News Staff →
LADWP Will Tear Down Another Building
Layoffs Point To Closed Schools