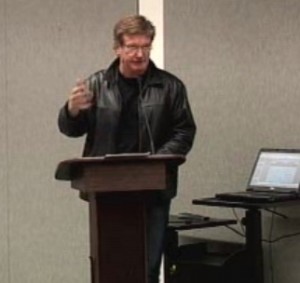 MMSA CEO Rusty Gregory talked to the Mammoth Town Council and the community about what he described as a devastating drought year.

Mammoth Mountain CEO Rusty Gregory continues to accept full responsibility for the layoff of 75 year-round employees and for what he called the intended and unintended consequences.  Gregory appeared at the Mammoth Town Council meeting Wednesday night sto repeat the news of the 30% loss of revenue and skiers and the impacts on the workforce.  Gregory also continued to answer questions about his actions.

Asked if the Ski Area did layoff 40 Mountain Hosts, Gregory said it was 41.  He said the Mountain did maintain 80 hosts.  He said there is a lot less skier demand and need for hosts, who are mostly retirees who used to volunteer services but are now paid minimum wages plus ski privileges. Gregory said the hosts laid off had not had many hours for some time.

To questions about maids, janitors and maintenance people, mostly Hispanic, being laid off and then contacted to come back to work for no benefits, Gregory said that was not true.  He said of the 75 people laid off, 64 were Anglo and 11 were Latino.  He said a lot of maintenance jobs were eliminated and will have to be dealt with later.

Gregory said that the Mountain did offer the laid off workers seasonal jobs but did not offer employees to return to the same jobs with no benefits.  The CEO said that in one case a Housekeeping Supervisor who was laid off did come back to the Mountain and asked if she could work as a seasonal housekeeper.  She was given that job.

To rumors that some workers were asked to work 6 to 8 hours over their 8 hour days for no additional pay, Gregory said that was not true.  To questions about whether the Ski Area could pay its operating expenses, Gregory said, yes, but in addition, he said, the Mountain must cover deficits from summer months, must pay $18 million in bank loan interest, taxes, capital outlay, and other expenses outside of regular operations.  He did say that bank interest has dropped from $35 million a year when the company sold to $18 million. Gregory said that he took actions to avoid having bank officials sit at the table to run the company to make sure their payments were made.

At the Town Council meeting, Gregory also pointed to the community impact of the loss of 75 jobs.  He said that’s $2 million less in monthly payroll and the generally accepted multiples of financial impact community wide. Gregory repeated to the Council that this year has been singularly devastating in lost skier numbers and revenue as the result of a regional and even nationwide drought.

Rusty’s a liar! Many MMSA employees have had to work 6 hours extra per day with no additional pay. These employees are afraid to speak up in fear Rusty will fire them too!

I hope the TC was taking good notes. The same thing is about to happen to them.
CUT , CUT , CUT and when they are done they will need to cut some more.

man.did this guy watch happy days and think Fonzie was the man? All black? I wonder what he wears in Balboa on the weekends? Pretty funny actually. He has a hard job that is for sure but he need the queer eye for a lame guy makeover!!

Rusty will fit in just fine in the OC .

I actually supported the way Rusty handled the slow start to the season. I was wrong.

It seems the only building and running business that’s going to exist and make $$$ in Mammoth Lakes is 420.

Not just In Mammoth Lakes but all of Taxifornia,
Welcome to the new normal