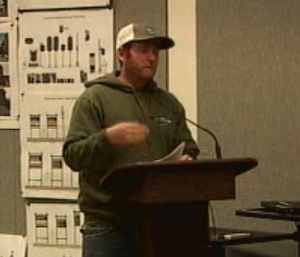 When the Mammoth Town Council met Wednesday night, they heard about gratitude from contractors, plans for Veterans Day, articles on Mammoth, and an important meeting.

Tim Flynn, President of the Contractors Association in Mammoth, stood up during public comment to thank the Council for their agreement to reduce Developer Impact Fees.  In August, the Council did vote to eliminate DIF for one year on some projects.

Meanwhile, Councilman Matthew Lehman reported that he and the Mayor joined a committee started by Mammoth School Superintendent Rich Boccia that continues to organize a Veterans Day celebration at 9am at Fire Station #1.  He said volunteers are still needed for that event.

Mayor Jo Bacon added that there will be a host for every veteran at the event.  Anyone available to welcome veterans November 11th should contact Rich Boccia.

And for those focused on how to get around town in Mammoth, Sandy Hogan, chair of the Mobility Commission, reminded the public that November 15th at 4pm in Suite Z the Mobility Commission will meet for one of two traffic management workshops.  Hogan said this is a chance for the public to bring concerns to the Commission.  She said that public testimony in the past has led to new signage and traffic changes.  Hogan said one person can point something out to make a difference.

Finally, the ice rink in Mammoth will open December 2nd with new concrete work and new deals on pricing for families and individual skaters.  The Christmas tree lighting ceremony happens the same evening at the Footloose parking lot.